Perfect conditions for the second instalment of theGJW Direct SailJuice Winter SeriesForecasts for the Datchet Flyer weekend had been mixed, at one point predicting barely any wind on Saturday and stormy on Sunday. Saturday had been mild with a building breeze but after the storm passed during Saturday night, Sunday dawned to a similar light breeze, although greyer skies threatened rain. The breeze hadn't quite settled by the scheduled 10.55 warning signal time, so race officer Barry Peters decided on a 15 minute delay but promised to start by 11.30 at the latest. Sure enough, by 11.15 the wind moved round and started to build so Barry got the 2 fleets away cleanly, led by Toppers in the slow fleet and the Contender and D-Ones in the fast. Not at all unaccustomed to leading boats around the course in normal circumstances, Nick Craig, sailing his D-One, was eager for confirmation that there was a lead boat for the big, 8-mark course around Datchet.The 'C' (or perhaps bucket) shaped pursuit course was stretched at the edges to use as much of the Queen Mother reservoir as possible and by all accounts kept everyone warm and entertained, afloat and ashore. With the split starts, all boats except the Moths had started within half an hour - the Merlins setting off at 27 minutes after the International 14 at 25 minutes. Even the Moths sailed for a whole half of the race duration - hence having exactly half the time of the D-Ones and Contender to cover the same distance.The 2 beats of the course stayed true for the whole of the 100 minute race. As the wind built to 16 knots the gusts were just over 20 and holding kites on the bottom leg of the course in front of the clubhouse became borderline, increasingly being dropped early before the leg up to the gate. With boats either hardening up or gybing on the mark directly under the window of the Windsor Suite of the clubhouse, the gusts were clear to be seen singling out those due for a quick dip in the lake.With the pressure on to better his overnight 2nd, Patience's job was to overtake the Contender and D-One whilst holding off the pack of Musto Skiffs. And of course put a few boats between themselves and the rival Fireball team of Batchelor and Pascoe. Top speed recorded by the trackers in the Mustos was 16.2kn, eclipsed by the Moths topping just over 20kn. The Cherub of Clive and Alex Everest had looked strong all weekend and very nearly sneaked the pursuit win but Luke and Richard held on to the 100th minute. The Mustos filled the teens, taking most places from 7th to 20th.In the slow fleet the Toppers and 4.7s held off the faster boats for quite some time, particularly Josh Haynes (Laser 4.7) who held on until well into the third lap of the race and eventually finished 9th. With wind increasing through the race the faster Blaze, RS300, Icon and Merlins came though by the 100 minute signal but as well as Josh the well-sailed brace of solos were only just outside the top 10. Tom Gillard just edged to be top Solo over Michael Sims on Sunday and theirs was not the only close tussle within fleets. Three Laser 4.7s came within 5 places of each other on Sunday and in the 29ers the top place was changing race by race - Jess Hammett and James Cook had the upper hand during the handicap races but it was Phoebe Connellan and Hatty Ward leading the 29er fleet on Sunday.The tracking coverage is on-line at www.sailjuiceseries.com - click on the 'Datchet Live' button near the top LHS to replay the battles that took place over the weekend.Datchet's innovative pursuit format was well received as a welcome experiment to spice up the winter sailing. The boats were certainly more evenly spread around the course and a different selection of boats got the opportunity to try out the experience of clear air. (And Nick didn't lose his way.) With the fleet size being halved the double points brought the results back in line with the numbers for the handicap racing on Saturday and overall the positions were very much in line with performances the previous day.Once the results had been churned, checked and re-checked Luke Patience and Richard Anderton took the Inaugural Badger Ales Datchet Flyer from Nathan Batchelor and Sam Pascoe. RS300 sailor Steve Bolland was in third, Stuart Jones in his Contender in 4th with the father and son pairing of Clive and Alex Everest in 5th place in their Cherub.Richard Anderton accepted the winner's trophy on behalf of Luke. He also promised to give him his share of the Badger Ale and look after Nathan and Sam's too... Richard thanked the club for the effort they had put into making this new event such a success with over 100 entries over the 2 days. The fleet had been treated to good racing all weekend and he could only see that next year it would grow yet furtherOverall Results:1st Fireball, Luke Patience & Richard Anderton2nd Fireball, Nathan Batchelor & Sam Pascoe3rd RS300, Steve Bolland4th Contender, Stuart Jones5th Cherub, Clive & Alex Everest6th B14, Mark Watts & Chris Bishop7th Merlin Rocket, Jasper Barnham & Graham Sexton8th D-One, Nick Craig9th Musto Skiff, Ben Schooling10th Merlin Rocket, Olly Turner & Hamish Kilburn 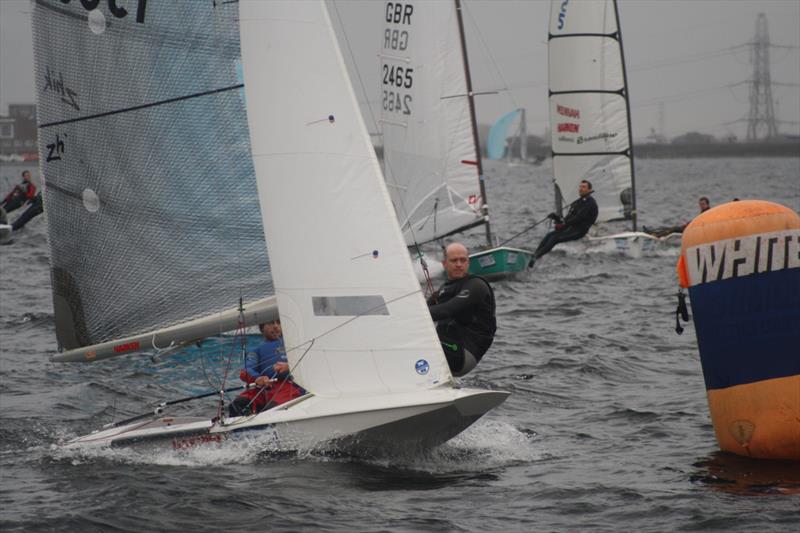