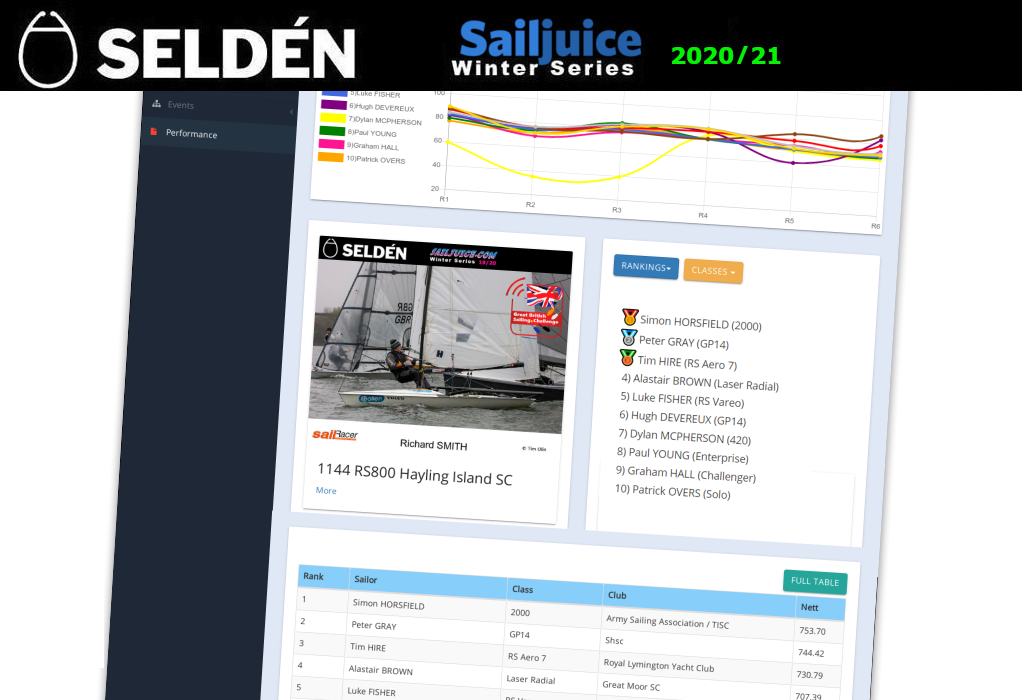 Since it started in 2009, the Sailjuice Winter Series has always pushed hard to bring new ideas and innovations into small-boat racing

Taking place during the winter in the UK, the Selden Sailjuice Winter Series brings together some of the biggest winter handicap racing events into a unified series, to find out just who's tough enough to race their way through another brutal British winter.

The Selden SailJuice Winter Series aims to appeal to as many classes as possible, with typically almost 100 different types of boat represented across the season, from fleets as diverse as the traditional Norfolk Punt and National 18 to emerging classes like the Hadron H2 singlehander.

Some fleets choose to use some of the events as their class championships, such as the RS Aero which typically brings up to 50 boats for the concluding event of the season, the Oxford Blue, serves as the Aero Winter Championships.

Taking place since 2009, every winter around one thousand competitors take part in up to a hundred different types of boat, ranging in speed from the Optimist up to the International Moth. The willingness of the Seldén SailJuice Winter Series and the Great Lakes Group - who run the handicap numbers for the Series - to accommodate virtually any kind of sailing dinghy into the competition is very attractive particularly to those fleets that struggle to establish a number on the RYA PY system. Equally, the Series has also proven popular with big fleets like the RS Aero who have the strength in numbers to run their separate events, yet still enjoy competing alongside other types of dinghy in mixed handicap competition.

The concept has proven so popular that Sailjuice has been consulted by US Sailing and representatives in Australia about establishing similar handicap racing competitions in their regions.

Our own Handicap Racing system for fairer racing

Over the years the Great Lakes Handicap Group has set its own variation of the standard RYA PY numbers to produce very close competition for pretty much every kind of boat that takes part. The more a class takes part in the Winter Series, the more accurately the Great Lakes handicap can be set for that type of boat.

We promote every event and the overall Series massively on social media, helped by the fact that our hardy photographer, Tim Olin, braves all conditions to take great photos of almost every boat that competes in the Series.

Hall of Fame: past winners of the Seldén Sailjuice Winter Series 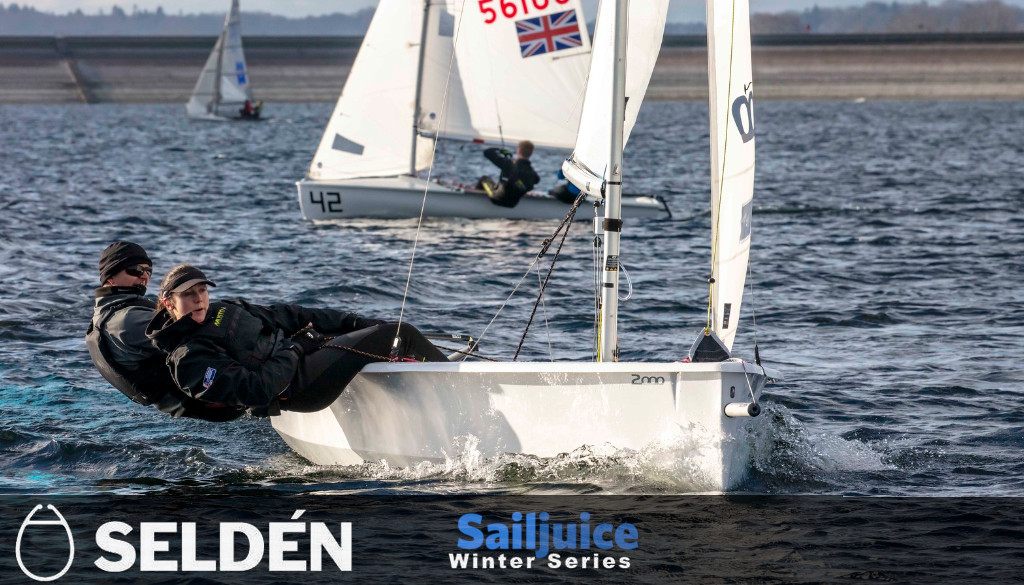 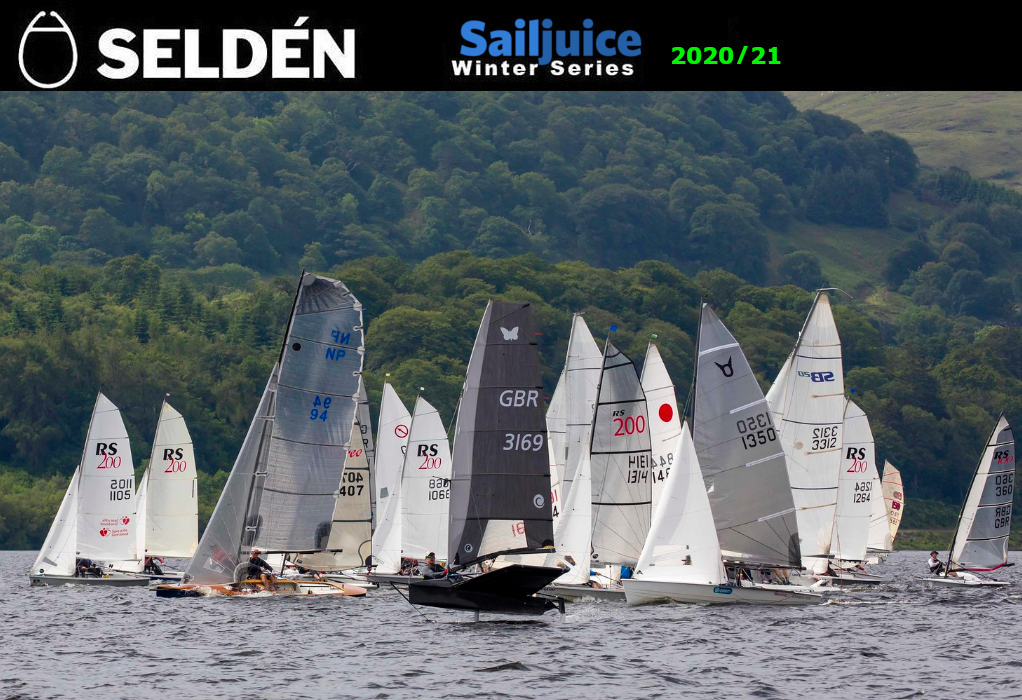 The first round of the Seldén SailJuice Winter Series is looking busier than ever, and competitors are advised to arrive as self-sufficient as possible... 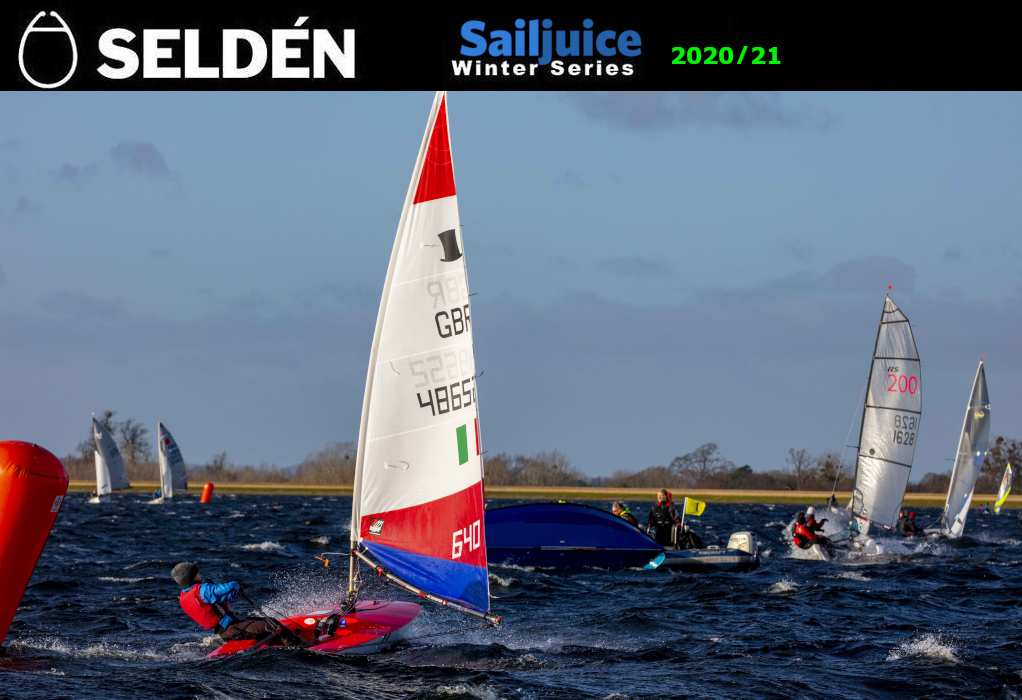 Another big turnout at the RYA Dinghy Show for the prizegiving of a wildly windy season in the Seldén Sailjuice Winter Series.... 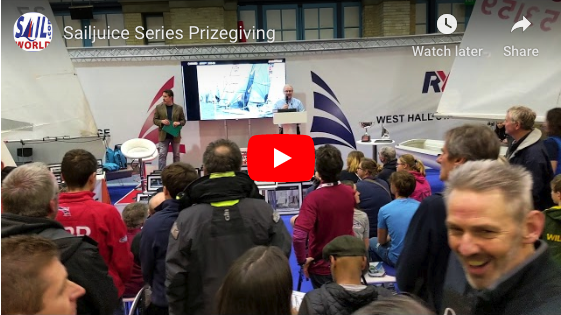 Where's the line between Windy and Too Windy? 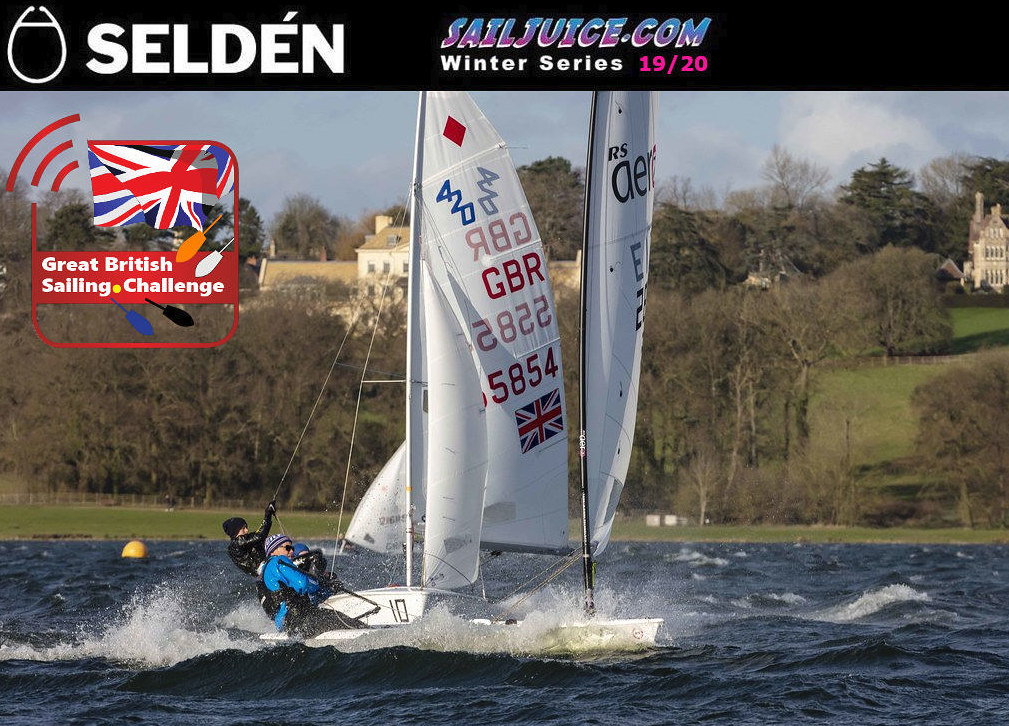 The 2020 edition of the John Merricks Tiger Trophy was one of the windiest on record. It surprised a few that it went ahead at all, but for the majority of the sailors that ventured into the 30 knot breeze, it ranked as one of their best days ever... 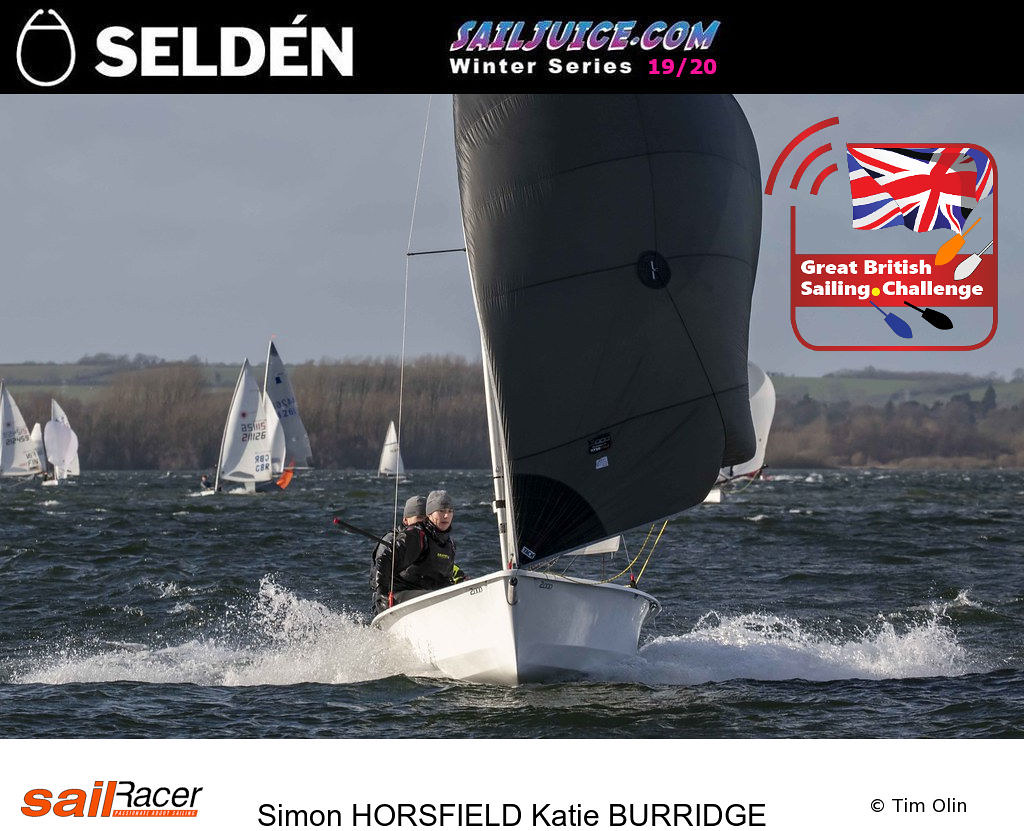 Simon Horsfield and Katie Burridge have become the first ever repeat winners of the Seldén SailJuice Winter Series, and the 2000 sailors will again receive the trophy at the RYA Dinghy Show... 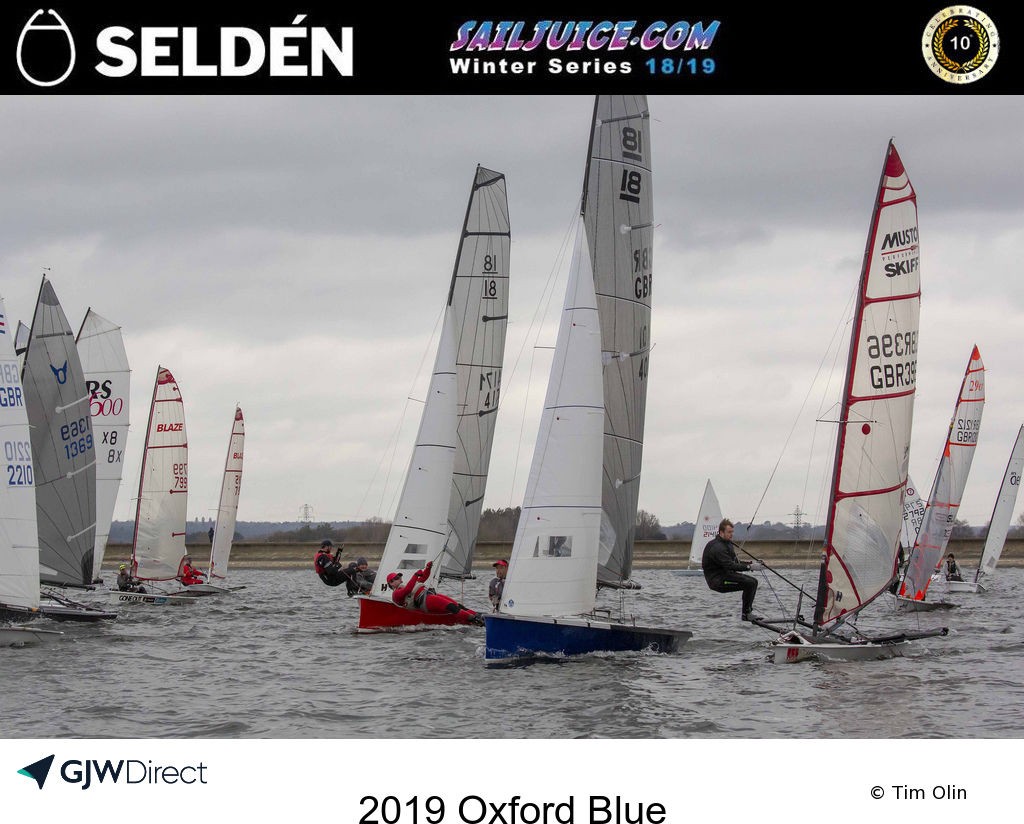 Peter Gray powered his National 18 to victory at the Oxford Blue, the seventh and final round of the Selden SailJuice Winter Series which took place last Saturday with a maxed-out 160-boat entry...

Super 8 in Podium Contention For 150-Boat Finale in Oxford

The seventh and final round of the Selden SailJuice Winter Series, the Oxford Blue, takes place on Saturday. With the entry list maxed out at 150, Farmoor Reservoir will be a sea of colour as the top eight in the Series prepare for a battle for the overall podium...

Round six of the Selden SailJuice Winter Series, the John Merricks Tiger Trophy, attracted 118 boats to the start line despite the horrendous wind chill factor. Old boys Neil Marsden and Jonny McGovern showed the nippers how to race a 420 at warp speed...

Ian Walker among the 100+ entries for the Tiger Trophy

Round six of the Selden SailJuice Winter Series, the John Merricks Tiger Trophy, is looking set for a challenging weekend for Ian Walker and the other legends getting ready for racing, not least an unlikely appearance from the commissioner of Hazzard County...

Monique Vennis-Ozanne and John Mather sailed their 29er skiff to victory at the GJW Direct Bloody Mary, round five of the Selden SailJuice Winter Series...

Ben Schooling won the Pursuit Race of the Fernhurst Books Draycote Dash by just 10 seconds. Here, Ben describes his strategy to tackling the potential chaos of competing against - and chasing down - 110 other boats on a congested race track....