The 2018 Miami World Series is over for all but the top 10’s as racing on day 4 was deemed impossible due to high winds. The top 10 49er, 49erFX, and Nacra 17 will race off for the final race live on Saturday January 27th, via youtube, starting at noon local time in Miami.

The three days of racing were a great test, with one day of light winds, one day of low-medium winds, and one day of heavy to survival conditions. Such a breadth of conditions, within the context of a flat water venue, provides some insight into the status of the fleet and also introduces us to some of the new players for 2020.

The 49erFX fleet is the smallest of the three with many teams still involved in the Volvo Ocean Race and others choosing to stay in Vilamoura (POR) and down under. Those showing up provided some of the most interesting results however. On the light day 1, only 2 races were completed with Argentinians Vicky Travascio and Sol Branz winning them both, but then were subsequently disqualified from the first race leaving day honors 2017 Junior World Champions, Ragna and Maia Agerup (NOR). Thriving on day 2 were Vicky Jurczok and Anika Lorrenz (GER), who won three of the four races on the day to jump into pole on the leaderboard. A third day with survival conditions saw only one race, and again it was the Germans winning, so they take a 10 point lead over 2nd place and are guaranteed at worst the silver.

The Norwegians follow in second, and then in third we have Austrians Tanja Frank and Lorena Abricht. Tanja is a convert from the Bronze medal winning Austrian Nacra 17 in Rio, switching to helming as well, and this marks their best performance to date in the 49erFX.

The medal race will also feature two Japanese teams from a striving squad that had three boats in the top 11, the Croatian team who narrowly missed Olympic qualification in 2016, a new American combo of Stephanie Roble and Maggie Shae, a new British combo of Sophie Weguelin and Sophie Ainsworth and our 2017 European Champions Tina Lutz and Susan Beucke.

The Nacra 17 fleet has been dominated so far by Australians Jason Waterhouse and Lisa Darmanin, check out the regatta summary. These two were suspected of being the closest to figuring out upwind foiling during the warm up ‘mid-winter’ regatta two weeks ago and seem to have been putting in plenty of useful time on the water so far with everyone learning what is basically a new boat. 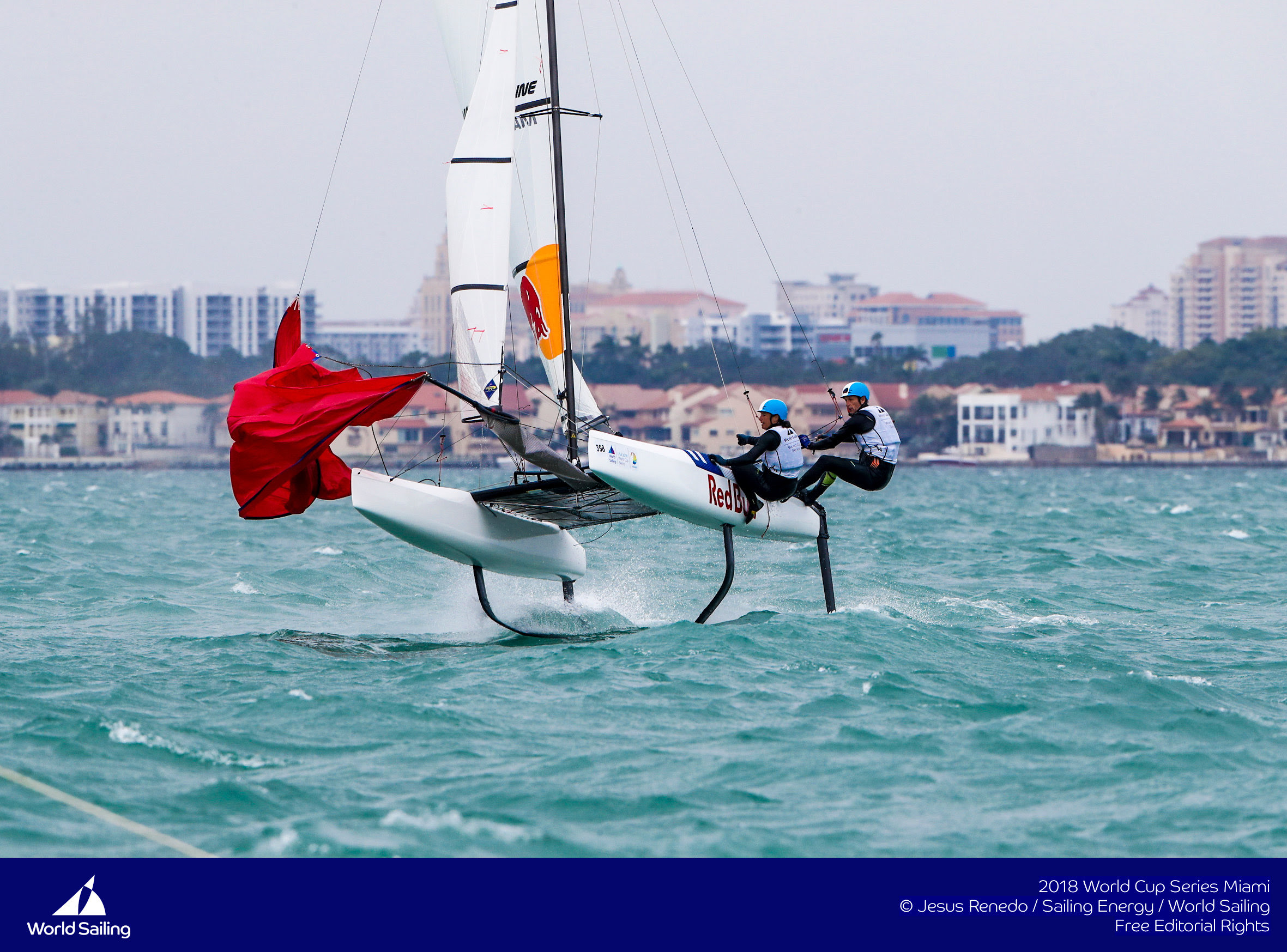 Five of the six sailors that won medals in the Rio 2016 Olympic Games are sailing in the class this week, and showing little willingness to share the wealth, so to speak.

Rio 2016 silver medalists Jason Waterhouse and Lisa Darmanin (AUS) have done their homework when it comes to the lifting foils that were introduced to the class less than a year ago. Whether in near-drifting conditions on the opening two days or the full-on breeze on the third, they have been extremely hard to beat, winning five races and posting just one finish outside the top four.

While the results indicate Waterhouse and Darmanin have a solid handle on sailing the foiling catamaran at the edges of the acceptable wind range, both acknowledge this is no time to get complacent with what is essentially a new class, even though the platform, with a traditional daggerboard and rudder, was used at Rio 2016.

“The reach from the offset to the finish is definitely quite gnarly,” Darmanin said. “Being a new class, we are all still learning to find the best way to get across the death angle. You can never know what can happen, but we try our best to stay safe but race at the same time, it isn’t easy.”

The reigning Olympic gold medalists in the class, Santiago Lange and Cecilia Carranza Saroli (ARG) are second, though they have nearly matched the Australian team over the last five races.

“We had a tight Regatta in the Rio 2016 Olympic Games with Jason and Lisa and I admire them a lot. “For the last six races we were neck and neck and I do love it. It’s what makes sailing enjoyable but we look forward to catching them up tomorrow,” said Lange.

The bronze medal skipper from 2016, Thomas Zajac (AUT) is sailing with a new crew in this Olympic cycle, Barbara Matz (AUT). While the consistency hasn’t been where they would like to see it, the new partnership has shown plenty of potential, winning one race and finishing second in two others.

In the 49er Fleet, it’s the favorites sitting on top of the tables, but it hasn’t been easy by any stretch. Dylan Fletcher and Stuart Bithell (GBR) lead by a few points over Diego Botin and Iago Marra (ESP). A finish in this order would mirror the warm up regatta, except for the absence of James Peters and Fynn Sterritt have not had their best week.

It hasn’t been easy or simple for the leaders. Fletcher and Bithell have done a penalty turn, hit the wrong side of the course, had a Black Flag, and capsized within the nine races. The fact they are still on top, though narrowly, shows that everyone in this deep fleet are finding races that don’t go their way and also show’s that when they are on their game they are sailing well. It was race 8 that they hit the wrong side of the beat, rounding the top mark in 17th place.  A wide rounding by the group in front of them let them gybe set with good distance savings. They got good pressure on the downwind, nailed the leeward layline, and rounded 6th at the bottom mark. Knocking 11 places off in a single downwind, where the wind was within normal range is a great telltale for doing well in a 49er regatta. 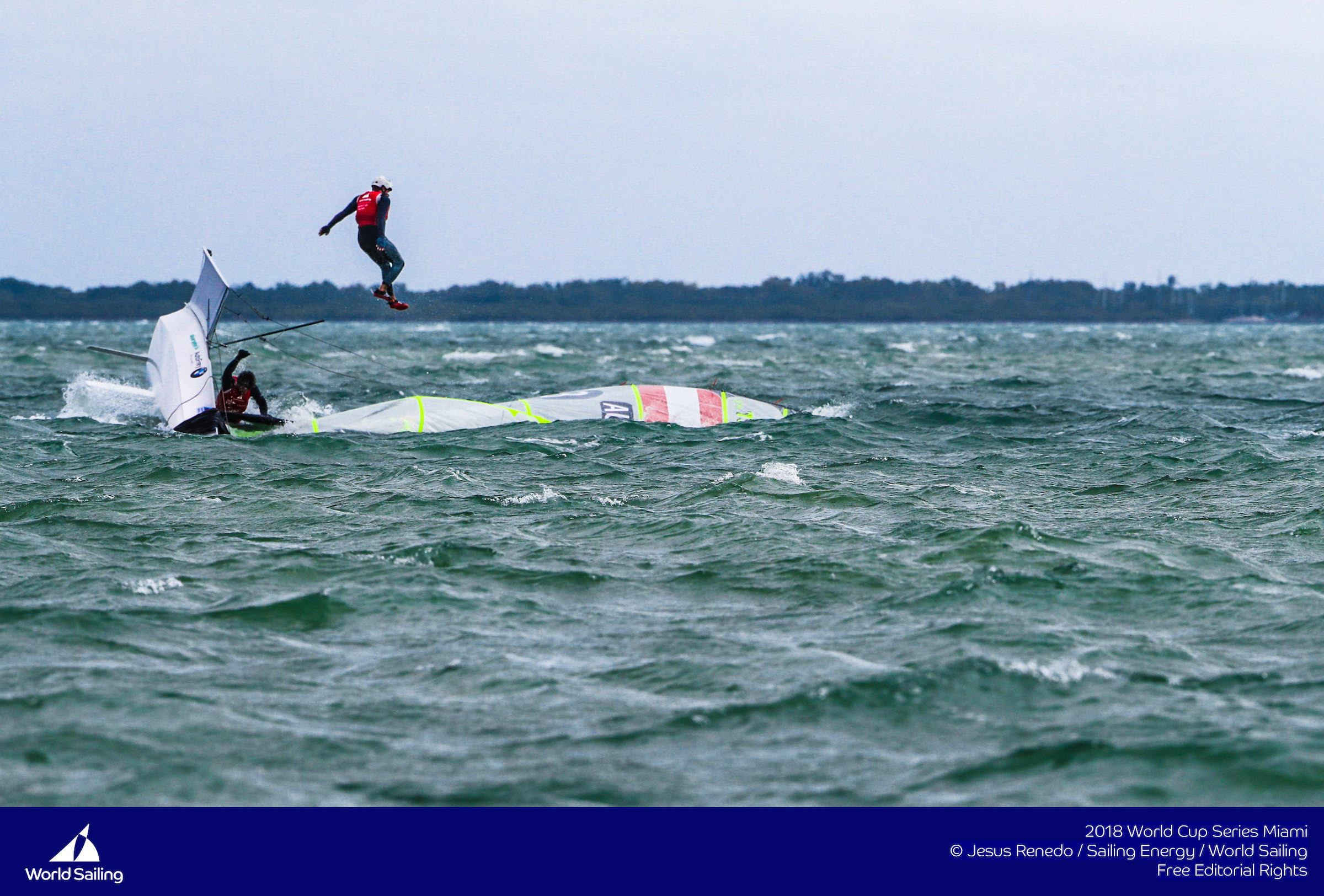 Botin and Mara have had a less dramatic route through the regatta, with six top 5 races and then three in the teens. That’s very consistent sailing for a team who are due for a breakthrough year. Their Spanish teammates, the Alonso brothers sit in 3rd place and make up the third team that has a chance at overall victory for the event. They started out with an average day on the first light air day, but since then have sailed all top 10’s. Interestingly, they don’t seem to have the breakaway speed of the other two, with only two races in the top 3 and no wins. Medal races feature decreased fleet density, so the lack of obvious clear cut speed may hurt their chances in the final.

The 49er top 10 features teams from 9 countries, with only the Spanish placing two teams. While none of these teams are in Olympic form yet, there are plenty of teams in the final who are likely to feature in Tokyo.

For all the photos, video link, analytics, results and articles check it all out at the 49er page or nacra 17 page.