Home | Psychology |Joe Glanfield Interview: Be happy to get lucky

Joe Glanfield Interview: Be happy to get lucky

"Luck is what happens when preparation meets opportunity."


In the previous part of this article, we looked at the dangers of being too greedy, of seizing at opportunities when they turn out not to be there, and also of not taking advantage of real opportunities when they do arise. Interviewing Nick Rogers and Joe Glanfield every day as they came off the water in the Olympic Regatta in Qingdao, it was always hard to tell what sort of day they'd had. They'd make great poker players, because whether they'd had a great day or a crappy day they always came off the water smiling and joking. They seem to wear the pressures of Olympic sailing very lightly, in a way that few sailors seem capable of.

So that's where the interview started:

It was impressive how every time you came ashore, you seemed able to laugh and joke about your day, even after a crappy day. Is that something that came naturally or something that you had to work on?

It's definitely something we've worked on. Nick and I probably two of the most intense people you could meet, we're just good at hiding it! We went to the Games with a lot of pressure to win gold, but we knew if we went in with that attitude it could all end in tears in a venue like Qingdao. It's all about doing the sensible things, being conservative, picking up boats when you're doing badly, holding on when you're doing well, and letting other people the mistakes. 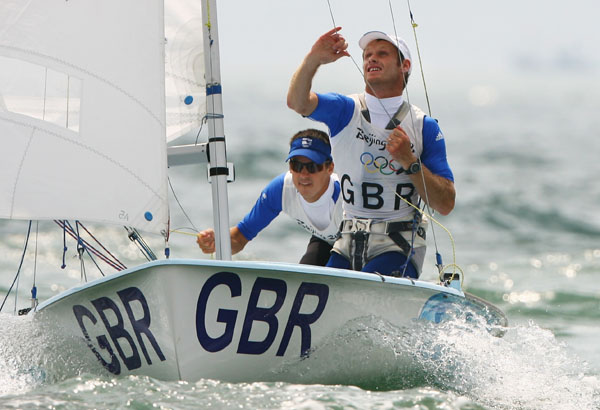 The Australians obviously did it better than we did but it was incredible how similarly we were sailing, both very conservative in our strategy. We always seemed to be in similar places on the race course, just picking off boats here and there where we could.

That approach also relies on getting in a full series of races though, doesn't it? I mean, I can't remember exactly where you were lying with three races to go, but I don't think you were in the medals at that stage...

We were 4th, and then OCS in the next race! Yeah, you're right, we spoke about this, and we said ‘one thing we don't want to do - say we're 8th overall after two days - is we don't want to panic.'  You need to have some trust that the series is going to happen, otherwise you'll start going out in the 6th race and try to win it just in case there's a bad weather forecast for the next few days. We only needed 10 races to make a full series and we had two lay days, so we felt confident the likelihood was we'd get the majority of the races in. It's something we talk about a lot, the psychology, keeping yourself on the level, not getting too excited when you win or too down when you lose. It's not easy, it's something that takes practice and it's something we got a lot better at in the year before Athens, and been pretty good at that since then.

So in the lead-up to Athens, what did you change?

The priority you put on it. We put a higher priority on being in the right frame of mind as opposed to sail development or just about anything else really. Suddenly psychology came right to the top, what frame of mind to be in, and we'd talk about a way of looking at the races. We said there are 10 races for a reason, there is a bit of luck involved in sailing, and you're not going to get a 1,2,3 in the first three races of a series. What happens to a lot of people who start a regatta badly is they're not in the right frame of mind to take advantage of situations when the good luck comes at the end.

On the other hand, if you're still in a normal state of mind at the end of the regatta when the luck comes your way, you're still in a mental state to be able to make use of that luck. We've had some massive comebacks over the years. and that really does make you realise that something is always possible. When we got the OCS in Qingdao, a lot of those times came to mind. For example there was a Princess Sofia Trophy where we went from 11th to 1st in one day. The biggest thing about that was we didn't do anything special, everyone else just messed up. We got a 2,3,18, and it was all really tight on points. We discarded the 18th and we ended up coming first by one point.

It's something you remind yourself of after having a bad day. It's sort of logical when you think about it. If you come in from Hyeres on a light wind day having got three 10ths, you've had a pretty good day. That is 30 points, which is a lot. Whereas if someone is 5 points ahead in the Olympics, you think ‘can we ever make that up?' And the answer is ‘Yes!' You can make it up in just a couple of races, without doing anything that special either. Psychology is such a big part of it, especially when you get to the Olympics.

So is this stuff you've worked out all by yourself, or have you worked with psychologists?

No, never seen a psychologist. But our coach Hamish Willcox [a three-time 470 World Champion from New Zealand] is on to it, and so are Nick and I. We talk about so much of it. We've always got a control over it. Another strength of our team is we're both very different people, but both of us have to find different places in our heads to sail at our best. I know it is important for Nick to be in the fright frame of mind as much as me. We give each other huge freedom, and put a lot of trust in each other. Whatever he might need to do to put him in the right frame of mind is fine by me.

Also, the fact that we have such defined roles in the boat works so well for us, especially as the pressure builds in an environment like the Medal Race, where the racing is so quick and intense that there's no time for have an argument or debate or difference of opinion, because nothing is a joint decision. It's either down to him or down to me. In a lot of 470 teams, the helm is trying to do much, the helm has more things to do than the crew. A lot of teams have a discussion upwind and downwind. We don't have that at all. Downwind Nick does it all, says ‘gybe', and I talk to him about the VMG of the boat, sailing too low or too high, through the feel of the kite sheets. But I'm just looking at the spinnaker. He does all the boat-to-boat stuff and the wind information. I'm facing the wrong way to see the wind downwind. Upwind it's the opposite. He listens to me, and I tell him to tack and he'll do it, even if we end up second last at the windward mark!


The big lesson from this interview is to accept that just because you've had a bad start to a regatta doesn't mean you've lost. But if you assume that you have already lost, then you'll never be in the right frame of mind to take advantage of opportunity when it comes your way. So if, like Nick and Joe, you can keep your head when all about you are losing theirs, then you'll be a winner, my son. (Apologies to W.H. Auden)