Why Ben Schooling raced in the SailJuice Winter Series

Paul Manning asked me to write a few words about my experience of the GJW Direct SailJuice Winter Series over the Winter. As the website describes: "The series is based around six of the UK's biggest winter handicap events. Sailors from many different dinghy fleets now consider this series as one of the main goals of their winter racing. With great prizes on offer, it attracts some of the best sailors in the country to compete against each other". This year saw over 800 separate competitors and over 200 taking part in 2 or more events with several of the events reaching record breaking capacity.

I saw it as great opportunity to promote the Musto to other classes and did have several people asking interested questions such as, "what's the weight range?" and "how hard is it to learn to sail?"

Lucky I'm based in Oxfordshire so all events are within 1hr 30 drive – apart from the Brass Monkey which I didn't attend. I also didn't attend the Bloody Mary partly as we had 6 boats out training at Datchet that day and partly because of the horror stories of launching and general dinghy park management. However speaking to Mark Cooper (260) and the 49er boys (who finished 2nd overall in the series) the feedback was QMSC put on a great show with dedicated shore teams who lifted the boats straight into and out of the water.

First event was the Draycote Dash with 4 races on a trapezoid on the Saturday. The breeze started light and I had a good tussle with the Int Canoe which was hard to shake off. By the 3rd and 4th races the wind had built to 12-15kts and the course had skewed almost to a windward/leeward so I could hold the kite nicely and stretch out from the main fleet and was pleased to score a couple of bullets. The tricky part came when catching up the slower boats on lap 2 but you can't beat blasting past slower boats!

Sunday morning was still sporting the tail end of overnight gales and was gusting 38kts when I arrived in the dinghy park. The thought of orienteering around the lake on tight reaches for the pursuit race didn't appeal I made an early call drop the rig and head home. The wind actually dropped off significantly during the 100 min race and think with hindsight I could have got round. Potential Musto convert Peter Nelson did a great job to finish 6th in his RS600 and win the Dash overall.

Next event was Grafham Grand Prix and we had 4 of the Datchet Musto's make the trip. The format was two long windward / leeward races and we had some great racing in the tricky conditions. The combination of the cold gusty northerly and hour long, 5 lap races meant it was a tough day on the water. Congrats to Ian Martin being top Musto sailor and finishing 3rd overall in the fast handicap. As with all the events the results of the fleets are combined using the Great Lakes Handicap system.

The third event I attended was the John Merricks Memorial Tiger Trophy at Rutland with 5 other Mustos. Once again on queue the breeze switched to the North and picked up to over 30kts for the Saturday so I had the Foo Fighters turned up loud on the drive up to get in the zone! Needless to say it didn't work and I rigged the kite wrong then capsized 4 times in the first race. I managed to sort the kite between races and get my act together as the breeze dropped into the 20's, and scored some reasonable results in the next two races. The pursuit race on Sunday was a superb event and probably the highlight of the series for me. I was pleased to only let the 49er and an RS800 slip through (and no moths!) and overtook over 200 boats which was awesome fun. The finish came all too early and just a few more minutes and I could have seen off the remaining Fireballs, 420's and Merlins.

The final event was the Stevie Nicholson Memorial Trophy which was postponed after freezing conditions meant it couldn't be run on the scheduled weekend. A light North Easterly and dusting of snow greeted the competitors so I was once again wearing all my sailing gear. There was just enough breeze to get planing downwind in race 1 and so the 3 Musto's and 49er pulled out from the main pack and I was pleased to pip the others on handicap after a good battle with Stuart Keegan (384). Because of the fairly limited sailing area at Pitsford Reservoir the fleets took turns to sail which meant we had a welcome lunch break between races and a chance to warm the toes. By race two the breeze had died down to 5kts and with the kick off to the Rugby pending the PRO opted for a short 2 laps – 27 mins which meant I didn't get away from the main pack enough to be the right side of the handicap.

Overall the series was great fun and I'd highly recommend entering at least one event next year. 4 or the 6 are just one day events so if nothing else you get very quick at packing up the boat after a cold day on the water! All of the events are for a good cause with a percentage of the entry fee going to charity and the team do a great job of real time updates and blogs to create a decent amount of hype for the sponsors. Hopefully I've managed to recruit a couple more sailors to join the MPS club including the overall series winner (and current Fireball World Champion) Simon Potts. Finally, a big thanks must go to Andy Rice for all his hard work behind the scenes co-ordinating the events and updating the website.

Look forward to seeing some of you at Datchet or later in the season. 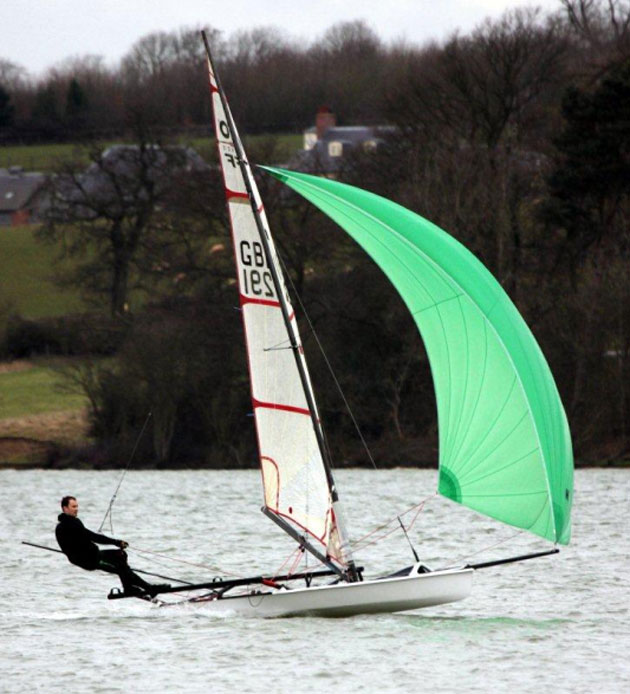