Predicting the Next Wind Shift

The one wind instrument that never lies is the masthead fly — the wind vane on the top of your mast. Yet sometimes, especially in the spring, you might think this normally reliable friend has gone wacky.

This difference is called ‘wind shear’. Once you can recognize wind sheer, you can improve your race results in several ways. First, the direction of the wind up high is the direction the wind will be blowing shortly on the water. The masthead wind indicator will be pointing out the next wind shift.

This happened twice in three days recently on Long Island Sound. A recent Thursday night race started in an easterly and the course was set up to be a square two-mile beat. After trimming in on starboard tack at the start of the race, I noticed the masthead wind vane indicated the wind practically on our beam. This told me to sail to the right side of the course in order to get the impending right shift.

When we tacked to port in order to move to the right side of the course, the lower telltales on the jib were flowing straight back on both sides of the sail, while the masthead wind vane showed the wind coming from straight ahead and our boatspeed was a knot less than it was on starboard tack.

When we did tack to port, we had to take the stern our closest competitor in the race. They kept going to the left side of the course on starboard as we sailed to the right side on port. When we tacked to starboard on the layline, we kept getting lifted and ended up over-standing. The boat we ducked was more than 20 lengths behind us once she rounded the windward mark.

Secondly, once you know that there is wind shear, you can trim your sails differently on each tack.

When the wind up high is more from the side than the wind down low, you need to twist the tops of your main and jib to keep them from being trimmed too tight. To add more twist to the jib or genoa, move the sheet lead block aft; to add twist to the main, move the traveler to windward some and ease the mainsheet (make sure the vang is also eased).

On the tack that the wind up high is further forward than it is down low, there is nothing you can do. Trim the sails in as tight as possible and know that you will be sailing slower than normal since the top of your sail plan is pointed too close to the wind.

Thirdly, once you know that there is wind shear, stop paying attention to your wind instruments. The apparent wind angle will be different tack to tack, your target boat speeds will not be attainable, etc. You’ll have to sail a bit by the seat of your pants until the wind shifts and blows in a uniform direction for your whole sail plan.

In the Thursday night race mentioned above, there is a second part to the story. Unfortunately, our competitor learned from their upwind mistake all too well.

After jibe-setting around the mark, we put up a spinnaker feeling rather smug that we called the beat so well. But as the wind continued to shift south, we peeled to our brand new code zero that had never been used in a race. Then, as the wind clocked further to the southwest, we had to change again from the code zero to a jib.

Seeing us struggle, our trailing friend rounded the mark and reached up with his jib. As the wind shifted from the south to the southwest, they were able to lay the finish while we had to do two tacks.

For more from words of wisdom from Adam Loory and UK Sailmakers, click here.... 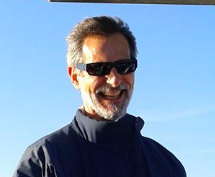