Audio (9 minutes) and text: Over the past 10 years double silver medallist Nick Rogers has operated in a world of small goals, working on small parts of his game in that quest for Olympic perfection. Now with a new and relatively inexperienced crew, Nick talks through the process of building a campaign from the ground up, how he goes about setting goals, and how he may be getting on a bit, but not in 470 years!

For some notes from the MP3 file, scroll down past the photo.... 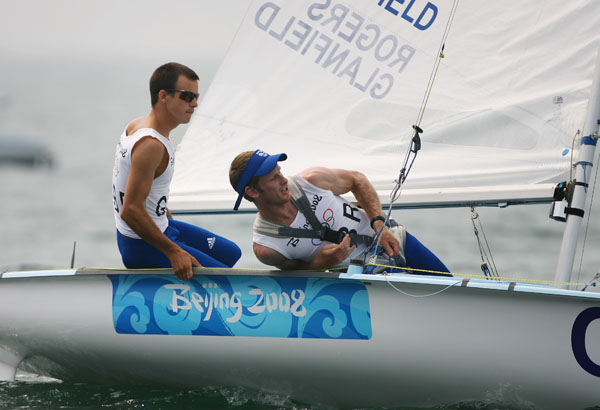 Below are some notes from the audio interview. It's not a full transcript, but enough to give you a flavour of what you'll find when you listen to the audio file...


SailJuice: How do you go about setting new goals for a new campaign?

Nick: We're aiming to win a gold in Weymouth 2012, and we work back from there. The obvious next goal is the world championships in Copenhagen, and asking what we need to do to be able to win that. So we make sure we can do all the simple manoeuvres, which is Tack, Gybe, Hoist, Drop and then we're going to get on with getting the boat up to speed and racing together.

SailJuice: You've mentioned four basic manoeuvres. How do you break down tack into its respective parts. Talk through the procedures for improving a tack?

Nick: We've just been in Palma and some days spent five hours on the water, and three of those might have been on tacking. So you just talk through each mistake, try different things, and move from there. Each time a tack doesn't feel good you talk it through. The whole point of the tack is how fast you come out of it, and different winds require different tacks, as well as different sea states. So we're slowly getting used to each other and how the wind should feel. So if Pom says, 'Right, I'm going to put my back hand behind me and see how it feels,' we try it 15 times and then he might say 'forget that, it was rubbish' and then we'll try something else.

SailJuice: Presumably you want to get all these experiments squared away in a practice session, not in racing?

Nick: Yes. We can sail the boat well enough around the race course, but we're not good enough under pressure, and we're probably only 50% consistent in our manoeuvres whereas we probably need to be at 95% consistency if we're going to win a major championship. We're not going to learn any ridiculous manoeuvres at the moment. Joe and I could double-gybe very efficiently in very light winds, Pom and I aren't going to learn any fancy-pants stuff because we're not good enough yet.

SailJuice: At this stage of a new campaign, you probably have a long list of goals right now. It must be good to have some big goals to get your teeth into...

Nick: It is good, it's nice to feel like we're doing that stuff, and I'm just loving sailing right now. I'm loving the sailing a lot, but to know it's going to end up in our home patch at Weymouth is going to be a real bonus, it will be great to see the British public involved in it. Winning gold in Weymouth is going to come down to how much you really want it, and I'm more than desperate, and that's one of the exciting things sailing with Pom. It's something he really wants, and I don't sit on my two silver medals at all. They're no protection for where I'm going.

SailJuice: But maybe there is some insurance policy in having those silver medals. Maybe it will mean you're not under pressure to win a medal in the way that almost everyone else will?

Nick: I have the experience of knowing how you need to perform at an Olympic event, and history says that previous medallists win medals. Kevin Burnham won gold in Athens, aged 48. Joe worked out that he would have to sail a 470 until 2024 to be the same age as Kevin when he won gold!

SailJuice: How's Pom coping with an Olympic campaign after doing a proper job?

Nick: He loves the goal and the detail of what he's doing. He's loving the unidirectional goal of Olympic sailing and that's something I've always appreciated in my life is having that direction. It just means you can wake up in the morning, and always know that there is something you can do to improve your chances of winning a medal.