Alexandre Paradeda is not only a member of the Quantum Sails family, but also one of the top names in the Snipe class and a Snipe World Champion. Quantum’s George Szabo sat down with Xandi (as his friends call him) to learn his secrets to his great racing at the 2017 Worlds and to get his expert tuning tips. 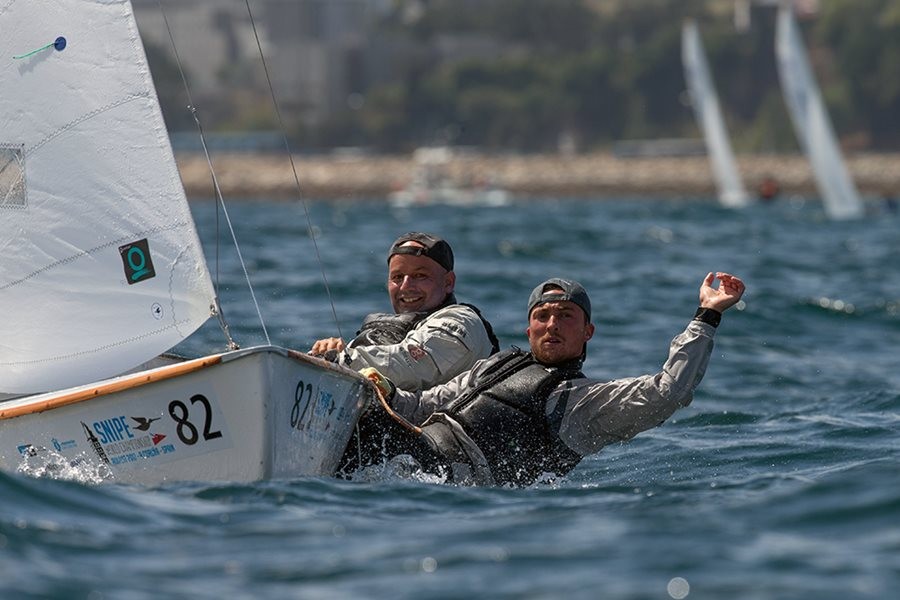 George Szabo: What can you tell me about going fast in a Snipe at the Worlds this year?

Alexandre Paradeda: When we joined Quantum last year, we worked with the San Diego Quantum loft to develop and redesign the sails, which proved very important for our speed. We also went into the 2017 Worlds with a heavy crew because we thought the wind would be strong. Brazilian sailors have a strong history of being strong on the reaches and downwind with a good technique. A heavy crew is not a big problem for us because we have good speed off the wind, and the upwind is much better carrying150 kg of weight. I arrived in Spain weighing around 150 kilos (330lbs), but now I will try to lose some weight!

Paradeda: This seems like a very hard way to sail to me. I prefer 650-656cm. In the last race we used 647cm. That was the first time I sailed so down on the shrouds. The feeling of the boat was very good. We improved more with that condition. This was one turn more in the tension than normal and 647cm rake. We were going more aft on our mast rake. With the mast forward, the boat was very hard to sail in strong wind and waves.

Szabo: How do you approach your Snipe tuning?

Szabo: Do you move the mast step?

Paradeda: In my opinion, no, I don’t move the mast butt. Bruno Bethlem used this technique some years ago, and he was very fast with more wind. I never change from the old rule. Four years ago, Bruno came back to the old rule, too, and he never changed again.

Szabo: My jib was lower, closer to the deck, and looked closed in the bottom.

Paradeda: When Augie had very good speed – in the 10 knot range -- something like what you described is exactly the result of the jib being in a good position at the deck. When he sailed with 18 knots, the jib was too low on the deck, and he lost the jib.

Szabo: When I look at the jib, I look to the mid or next seam up parallel to centerline. It looked like your jib had return all the way.

Paradeda: I think it was because our jib was higher. The problem for me was that when I put the jib lower on the deck, it was very hard to close the leech at the top. So I had the jib higher off the deck, but the foot was touching only 10cm of the deck. Sometimes when I am sailing and the jib is not touching the deck, it makes a big difference on the height. I saw your jib and Augie’s jib in the front of the boat. You were about three inches off the deck at the tack, more or less. My jib was almost five inches. It makes a big difference. I told my crew, “Look at the difference of the jib positions.” You can use the jib more flat at the bottom and the jib will close at the top.

Szabo: How far in/out is your jib on the splash rail?

Paradeda: We look at the distance to the spreader.

Szabo: And what do you see?

Szabo: Your jib looked to be sheeted very hard in medium air. How do you look at the jib trim?

Paradeda: When you have conditions like we did in La Coruna, the main boom eased very leeward (out). I put the jib traveler out/down 2 cm, no more. One race with 25 knots, when the wind was strong and the jib was flogging, my crew worked the jib sheet. When you need to put the jib sheet out, then the jib is too fat. Therefore, in this condition we put the car for the jib out, but kept the jib flat. With 15 knots, we used the jib inside every time [jib car all the way up/inside].

Szabo: What about your jib lead up/down?

Paradeda: In Porto Alegre, our water is 2m deep. When we need power, I pull down the jib barber to go deeper [the same as jib lead forward]. With stronger wind and big waves, I prefer having the jib more flat. The Snipe jib is a fat sail compared to other kinds of boats.

Szabo: What was your preparation for the Snipe Worlds?

Paradeda: I went to Ilhabella and practiced there one week with my crew. Before that, I practiced in Ilhabella with another crew to test the sails. I also practiced one week in Porto Alegre before traveling and one week in La Coruna.

Szabo: After we asked for your help looking at our rig set-up on the first day of racing, your comment was “lots more vang tension.” We did that and won the next race. What were you seeing?

Paradeda: The bottom of your main was too fat. You had too much power in the bottom for those conditions. When you used more vang, the bottom became flatter.

Szabo: With big wind shifts on the course before each race, one end of the starting line was often favored. What were you looking for at the start of each race? How did you approach the starting line? 2 minutes, 1:30 minutes, 1 minute, 30 seconds, and when did you pull the trigger to accelerate?

If you have any questions or need any help with your program or tuning techniques, don’t hesitate to reach out to either George Szabo at gszabo@quantumsails.com or Alexandre Paradeda at alexandre@quantumsails.com.

This article was originally published by Quantum Sails. Click here for more great tips and articles from Quantum...