Olympic sailing partnerships are a hard thing to get right. Getting the chemistry right between two ultra-competitive, highly driven individuals is very tough. Normally, a helm and a crew will seek each other out because they recognise each other for their talent. They work on the friendship later. And there have been very successful partnerships that have worked like that, where the friendship was very much secondary to the professional sailing relationship. Stevie Morrison and Ben Rhodes, on the other hand, have been friends with each other since they were in short trousers.

Actually, such is the international jet-setting lifestyle of a modern Olympic athlete visiting warm climes, they still spend most of their time in short trousers. But Stevie and Ben go way back, since they went to the same school in Exmouth and raced against each other in Cadets out of Exe Sailing Club. The friendship came first, and the professional partnership came very much later. 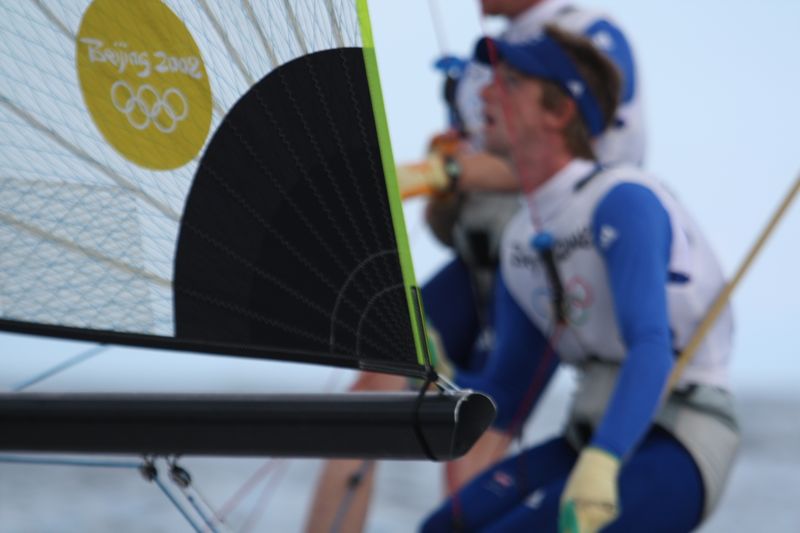 Perhaps this is why they come across as one of the most relaxed teams in the 49er boat park. They always seem to be having fun, to the point where they appear not to be taking it that seriously. If that's how it comes across, Stevie doesn't mind. "If I look across at one of my rivals looking nervous before a race, that gives me confidence," he says. "So if they look across and see us having a laugh, and that makes them even more nervous, then that's fine by me."

Sports psychology aside, it's hard to imagine Stevie doing anything other than laugh and joke his way through any situation, no matter how serious. It's probably what makes him and Ben such a potent force in high-pressure regattas. They seem to thrive on it.

While they are great mates, Stevie and Ben are also quite different characters, particularly on the water. Whereas Stevie never seems anything than laid-back horizontal (and maybe that's not such a bad thing for someone who earns his living on the trapeze), Ben can get more fired up on occasion. Perhaps it's the fact that he's red-headed, and therefore genetically predisposed to bouts of fiery temper, but Ben is quite capable of channelling that into the physical demands of crewing a 49er at the highest level. "It can suit the crewing role, sometimes I have to get fired up. It doesn't hurt to get a bit more angry about it. It helps with the whole explosive power thing, generally being quicker around the boat."

Of course, while it's not as obvious, a competitive spirit courses equally strongly through Stevie's blood. Not surprising, you might think, for the son of a sailor as successful as Phil Morrison, a former Fireball World Champion. Actually, according to Stevie, he gets his competitive streak from his mum, and not his dad.

"I think Dad is probably far more talented than me, but he misses out on the competitive side," Stevie reckons. "He's very good at making the boat go fast, but there's not much of a cut-throat side to him." According to Stevie, the Fireball Worlds win was more the rarity than the norm for his father. Finishing the bridesmaid was more commonplace for Phil. "He's come 2nd in just about every boat on the planet. He was 2nd in the 14s, the Merlins, quite a few other classes too."

Father and son have done surprisingly little sailing together. "We've never really sailed together, although I did crew for him once at Burton Week in an old knacker of a National 12. I don't think I was much use to him, I didn't like it when it was windy! We might have come 2nd in a light wind race, but it was probably after he was through his peak, and well before I reached mine!"

Stevie was never forced into a boat, it was something that he just gravitated towards. "Dad would probably have been happy if I hadn't gone sailing, he probably would have been happier if I'd have taken up a football career. More money! It's all about the money," he laughs, "but football didn't really happen for me." Sailing didn't really happen for Stevie either, until he was 8 or 9 years old. "I was petrified of water, which maybe is why we manage to stay upright most of the time when it's windy."

His first boat was an old Cadet called Scud, sail No. 956. "Scud was Spud Rowsell's first boat," says Stevie of a boat that has served many well-known sailors from Exmouth. "Scud's the same age as my mother, although I'm not going to tell you what that number is. It's quite old, although I should point out that my mother has worn better than the boat."

TO READ PART 2 OF THE STEVIE MORRISON INTERVIEW, CLICK THIS LINK....


Stevie Morrison is a smart sailor, which is why we've got loads more tips and advice from this dinghy supremo.

Click here to see what else you can find on Stevie...