Five-time US Match Racing Champion Dave Perry has some great tips about how to make sense of the wind. His advice is aimed at the match racer, but much of the same principles apply to fleet racing too...

When ahead, it's always tricky to know whether to “cover” your opponent or “sail your own beat,” meaning sailing to the pressure and tacking on the shifts. I call this decision “Terry or Torben.”

Terry Hutchinson is a world-class fleet and match racer (America’s Cup, TP 52’s, Farr 40’s, etc.) who likes to keep the race tight and under control when he’s leading. His belief is that if you can stay just ahead of your opponent, it is hard for them to pass you. Once you start to separate from them, looking to extend your lead, you give them leverage and you increase the risk of them passing you. Terry’s races are always close and tight to the end, win or lose. Torben Grael is also a world-class fleet and match racer (America’s Cup, five time Olympic medalist in the Soling and Star class, etc.). His belief is that if you sail the beat to best advantage, sailing in the best pressure and always on the favored tack, the other boat can’t beat you. His races are much more wide open, and he wins by a mile…and loses by a mile. I think both styles have their place in match racing.

To help guide my decision making, I try to think before a race or a day of racing, is this a “Terry day” or a “Torben day”? 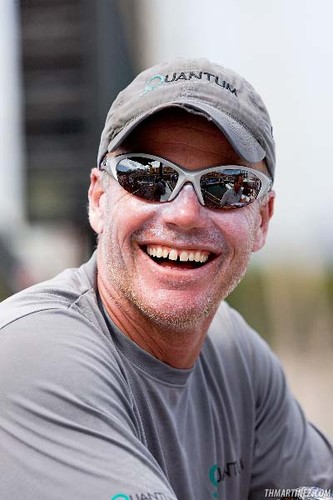 The reason you have to play it a little more open (“Torben”) when it is shifty or light is that it is often difficult to be on the same tack as the other boat. Say the other boat is several lengths to leeward and just ahead of you. When they tack, you could tack at the same time, putting yourself to leeward and ahead of them, go to their line and tack on them, in which case they will usually tack away setting up a split, or you could cross them and carry on, setting up a split. The best option is usually to stay in phase with the breeze and sail to the next pressure (meaning either tacking on them and forcing them the wrong way, or carrying on and letting them carry on in the wrong way). However, if it is a steady day, you might choose to cross your opponent and tack a few lengths to windward of them, staying near them (“Terry”) on the beat. And when in doubt, I like to keep it close (“Terry”).

Stay near your opponent or ignore your opponent and sail the best beat possible? That is the conundrum of every match racer. Hopefully thinking “Terry or Torben” will help.

This article originally appeared in The Dial Up Issue #8, US Sailing Match Racing Committee’s newsletter. You can read more or sign up to receive the next issue US Sailing website.