3 January 2012
Sunny skies, mild temperatures and moderate winds attracted the best turnout in years to the Grafham Grand Prix on 2 January. With 166 boats spread across four dinghy fleets and a small entry of catamarans, a number of high profile sailors turned out for the 31st edition of the regatta, which is also the opener for the five-regatta SailJuice Global Warm-Up 2012.
Newly returned from the ISAF Worlds in Perth, Australia, local 470 star Ben Saxton set a blistering pace in the RS200 with his crew Catherine Alton to win both races in the Slow Handicap division of 38 entries. Similarly consistent were Steve and Joanne Sallis with two 2nds in their National 12, while two 3rds gave third spot to last year’s Grand Prix winners Dave Lucas and Mark Longstaff, who came out on top of a strong Flying 15 entry.
In the 59-strong Singlehanded fleet, Ian Morgan took advantage of the Great Lakes PY adjustment to the Laser class to score two bullets ahead of Andrew Wilde, who improved from last year’s 5th place to come 2nd in the Phantom, ahead of Richard LeMare’s RS300. 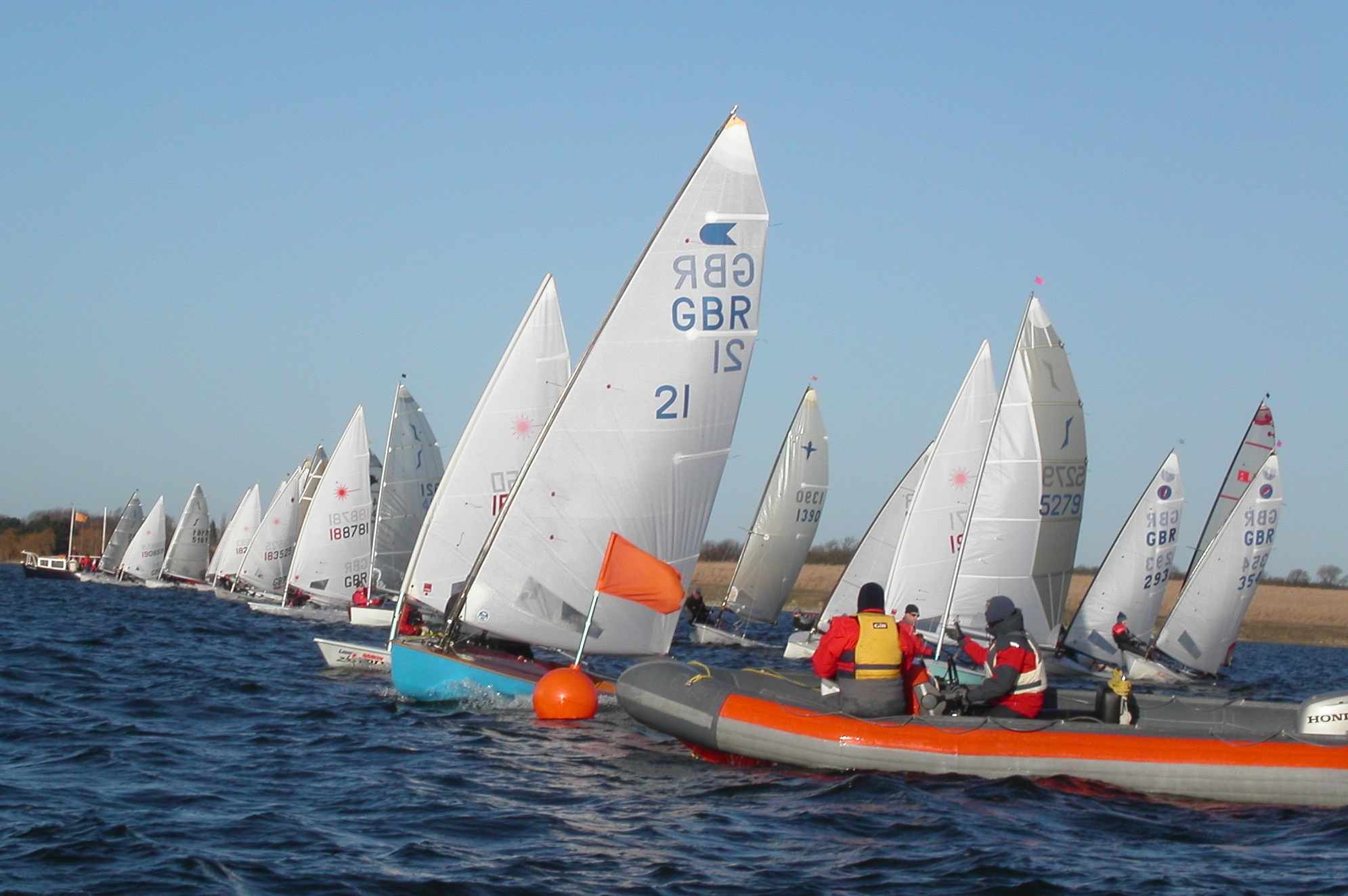 In the Medium Handicap fleet with 24 boats, Sam Mettam and national champion crew Richard Anderton took their Fireball home in first place, doing enough to beat the 505 of Tim Rush and Sam Pascoe who won the second race of the day. Dave Hall and Paul Constable have raced Fireballs together on and off for more than 20 years and a 3rd place showed this veteran partnership remain competitive as ever. Just behind them, former B14 World Champion Tim Fells and Chris Downham emerged top of a very tight tussle in the Merlin Rocket fleet.
Another World Champion who has jumped ship is reigning Musto Skiff World Champ Dan Henderson, now campaigning a 49er. Crewed by George Hand, Henderson notched up two bullets in Fast Asymmetric, ahead of Callum Ellis and Will Harris in a 29er. Mark Barnes and Dan Hare were 3rd in their B14. Last year’s Grand Prix winner and overall champion in the 2011 SailJuice Global Warm-Up, Andrew Peake, has moved on from his Musto Skiff and entered his first big race in the RS800. For his crew, Stephanie Brimacombe, this was only her 9th time in a dinghy yet they finished in 6th place, just one behind leading RS800 sailed by RS200/400 National Champion Dave Hivey and James Barlow.
Mark Aldridge won the Sprint 15 catamaran division with two victories.

Event organiser Dave Philpott was delighted with the high entry numbers and the bigger turnout of Lasers in particular. “It was interesting to see the increase in Laser entries, well above previous years, and one winning for a change,” he said. Ian Morgan finds himself in pole position for winning a brand new Laser sail, one of many prizes on offer for competitors in the SailJuice Global Warm-Up.
For full results from the Grafham Grand Prix, go here:
http://grafham.dyndns.org/Gwsc_Results/Open%20Meetings/2012/Grand%20prix%20Jan%202012.htm
The next event in the SailJuice Series takes place this Saturday, 7 January 2012, with the pursuit race classic near Heathrow Airport, the Bloody Mary.
Enter the Series here: www.sailracer.org/globalwarmup