The Bloody Mary Pursuit Race was held for the 41st time on Saturday at Queen Mary Sailing Club attracting 332 entries in 66 classes from 110 clubs all around the country. With the latest bout of stormy weather having passed through a few days earlier, the race was run in glorious sunny conditions a light breeze that was forecast to die off during the day. 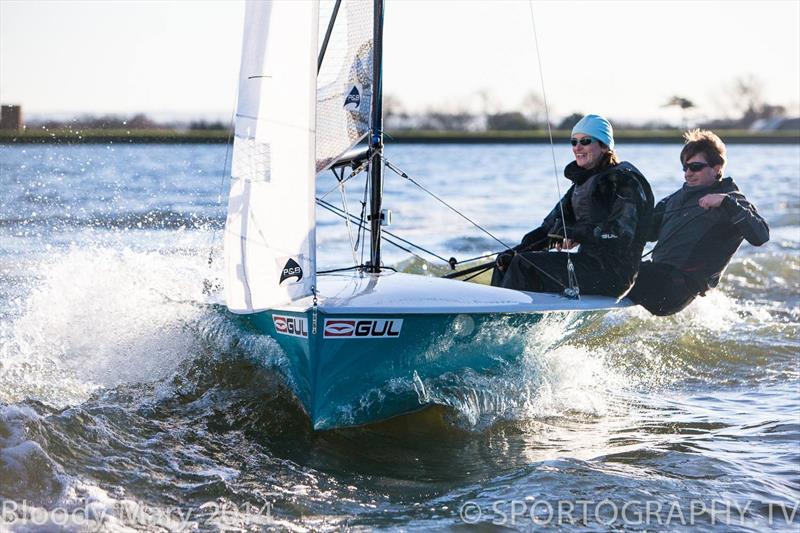 The Toppers, with the largest fleet of 34 entries, was led off the start by Michael O'Driscoll from Crawley Mariners. As the event unfolded an RS feva sailed by Will Taylor and George Catchpole took the lead after about an hour. The Solo of Michael Sims was closing fast with another Solo sailed by Tom Gillard right behind. The Lasers lead by Craig Williamson were also in contention.

With 24 minutes to go the National 12 of Graham Camm and Zoe Ballantyne which they maintained to the end. It's a fantastic result for this super National 12 pair who can now claim to have won the Bloody Mary twice!

In the closing stages of the race Tom over took Micheal in the Solos and two International 14's stormed through into the top 10 as the wind stayed fresh throughout the race.

Finally in the Ultimate TracTrac Battle of 'Topper v Moth' there was a big prize giving cheer as the Topper won on the day. Follow the link below for Tracking replay.