Claas Lehmann and Leon Oehme lived the longest day of their sporting lives on Friday—and came away champions. With Lehmann steering and Oehme out on the trapeze wire, they went to the line of race nine of the 2013 SAP 5O5 World Championship as one of three teams with a chance at the title, all of them German, all of them veteran, one of them a five-time champion who would have been the house bet to win. 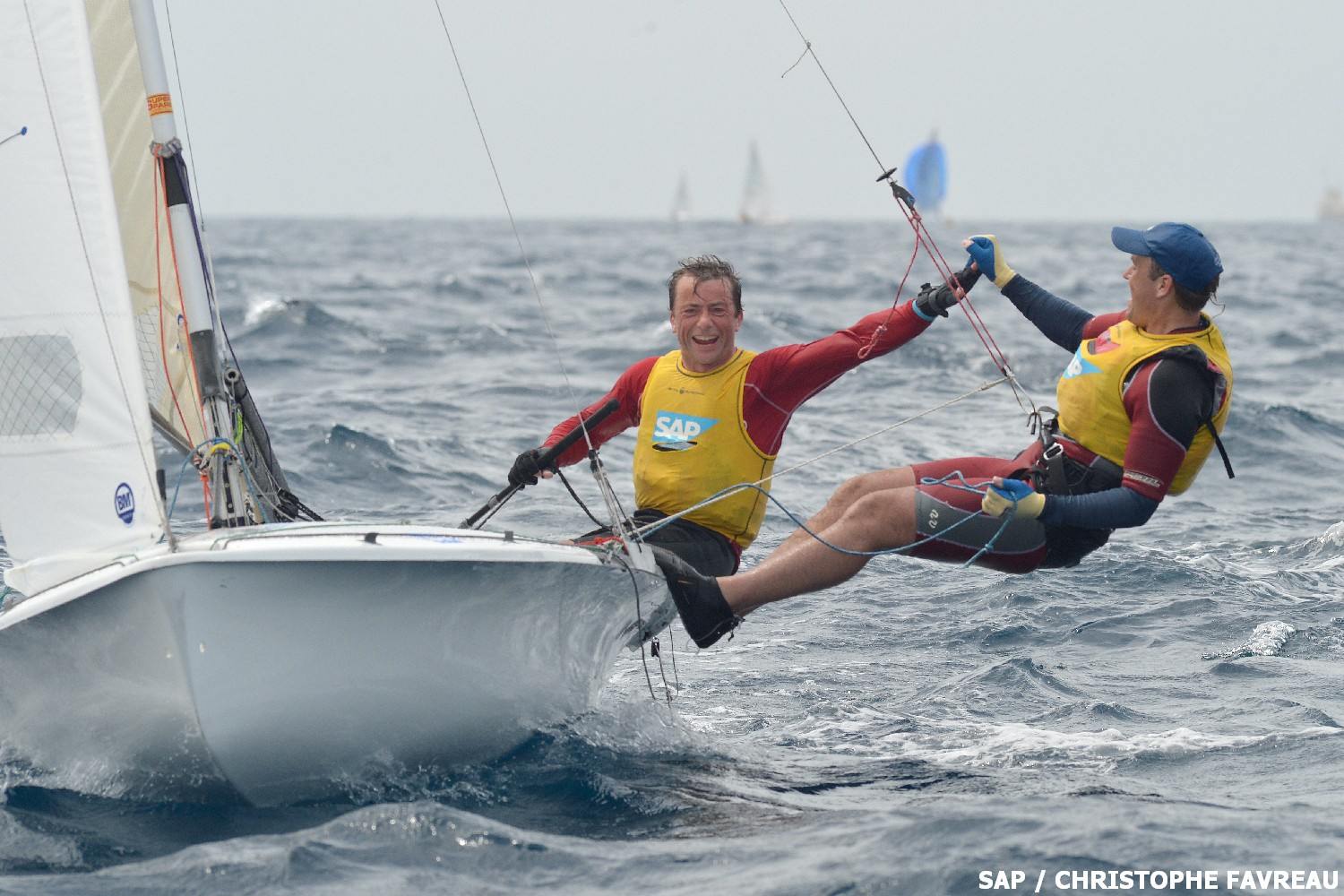 No one else in the 69-boat fleet could crack the top three, no matter what. Tensions ran high, ratcheted higher by a delayed start, and then—

"Both my opponents got poor starts," said Lehmann, in his other life a surgeon from Hamburg. "Right away we knew we had a shot, but it's a long race. So much can happen. We wanted to be safe in every move, and then—"

And then they touched a mark while rounding, and that's a foul. The penalty is to execute a 360-degree turn. In reality, Lehmann and Oehme had enough in the bank to take their penalty many times over, but the higher reality is that, when you've dedicated yourself for years and decades to racing one kind of boat with one tribe of people, who become your people, and you're finally on the threshold of winning the big one, it comes down, Lehmann said, to being "just too nervous."

No bother. The pre-race leaders, Cologne attorney Stefan Boehm and crewman Gerald Roos, were fighting in the pack for clear air. Five-time champion Wolfgang Hunger, a physician from Kiel, was doing better but not by a lot. Lehmann and Roos had been early race leaders, but it did not matter one whit that two boats had passed them. This wasn't about race nine. It was about the 2013 World Championship. Oehme told his skipper, "Just settle down and sail."

On the last leg of the race, even knowing that the left side had been heavily favored most of the time, Boehm and Roos headed to the right, just to roll the dice. "We would have done the same thing," Lehmann said, but instead of applying a tight cover, he worked back toward the middle of the course and called it good enough. American Mike Holt and crewman Carl Smit dashed out with a big lead to take first for the race, and Australian Sandy Higgins was out of touch in second, and they were welcome to it, and then—

Right in the middle of the celebration came word that Boehme and Roos believed they had been prejudiced at the start by a marker boat moving at an unsteady speed. Boehm was requesting redress. Suddenly, Claas Lehman and Leon Oehme might as well have been back on the racecourse, looking over their shoulders, and then—

It was over. The regatta's international jury took a full hour to consider the request but declined to overturn the results on the water. Lehmann and Oehme, who'd had a few instances of turtle dodging during the week—Barbados is an important breeding ground for hawksbills—had dodged their last bullet.

Boehm, who dropped out of race nine when he determined that the outcome of the race was already settled, came second in the final standings. Hunger was third, completing the all-German top three.

As usual at a regatta featuring SAP Analytics applied to racecourse data, the biggest rush to the computers in the SAP Sailors' Lounge, to try to sort out the why's, leg by leg and tack by tack, came from the less-consistent finishers in the middle of the pack. It's one thing to think you know something, quite another to see it through the data.