The 121 pre-entries to the event had been watching the forecast over the Christmas period with interest and trepidation as it fluctuated from a Force 6 – 8 early in the week to a gentle Force 2 on the eve of the event. With over 15 current or ex-National / International Champions in the fleet it was going to be a tough one to win - no matter what the conditions. 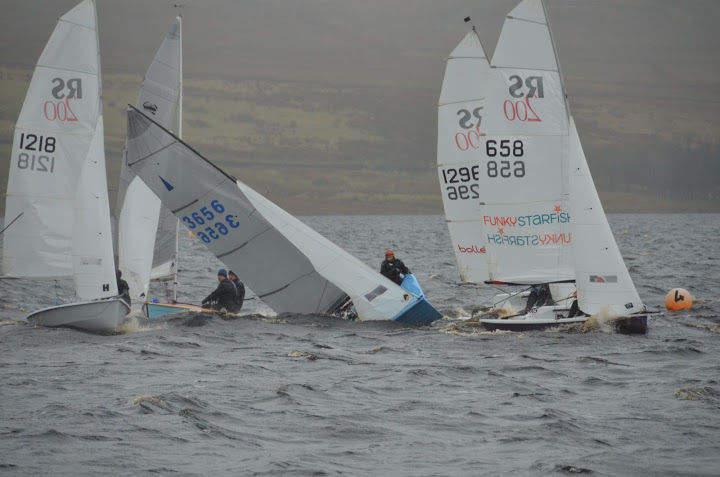 Early arrivals were indeed welcomed by a gentle Force 2 as well as the aroma of bacon butties! At this stage it was looking like a light wind event, but there was a sting to come. The wind built minute by minute and was measured at a good F4. One of the first to launch was the foiling Moth, who proceeded to entertain the packed viewing gallery with some spectacular speed and massive crashes. As more boats took to the water and came to similar grief, it was very clear the cold wind had some real punch as the gusts were definitely near a F5 by now. As the wind continued to swing to the north-east and temperatures plummeted, the race officer tried to reset the line, but eventually decided to get the starts going before everyone froze. With three separate starts but combined results it was important to have minimal recalls, so the black flag was in operation from the beginning.

The starts were: A - predominantly fast / trapeze, B – predominantly doublehanders and juniors, and finally C - the singlehanders. With staggered starts and handicaps, it was of course hard to tell who was winning, but the speed and handling of the Fireballs and Contenders was clear while the leading Lasers were in front of the Phantoms and others, and the RS200s looked to have the doublehanders under control. The course had to be set across the lake, and with resulting short beats and reaches, the faster skiffs never really got going before they had to tack, gybe or drop the kite. With a good F4-5 blowing and some meaty gusts now touching F6 but lulls near the windward shore, good boat handling and reactions became key, as almost half the fleet went for an early lunch after numerous swims. After all this the clear winners of race one were Tom Gillard/Simon Potts (Fireball), from Jack Wetherell (Laser) and Tim Holden’s Contender. So that went World Champ, National Champ, ex World Champ. No wonder the mere mortals were struggling to match their pace!

There were 12 different classes in the top 20 so the Great Lakes handicaps seemed to be working.

After a hearty lunch with over 250 meals served and hardly any delay, Race 2 started in a reduced breeze. It was still a F3-4, but the wind wasn’t quite as cold and so a few more ventured out. Again the Gillard/Potts team looked good as did Mike Saul’s RS800 until a windward capsize and lengthy swim. The Holden Contender was still in touch, and SailJuice series leader Peter Nelson (RS600) was also in contention just in front of the RS400 sailed by Martin Cooper / Nick Hunt. The Lasers were again dominating the singlehanders, but with the National Champion Jack Wetherell eventually pulling away from the pack. The leading 200s sailed by Matt Mee/Emma Norris, Johnny McGovern/Sarah Williams and Chris / Laura Pickles were again having a close race as were the Scorpions just behind them. Callum Escritt in the leading Topper had found some extra pace and eventually finished just in front of the RS200 bunch on corrected time. So Gillard/ Potts won a second race, with Tim Holden leap-frogging Jack Wetherell into 2nd. Nelson was 4th Cooper 5th and Callum Escritt 6th.

Overall, several boats had only completed one race but the worthy winner with two bullets was the Fireball of Tom Gillard and Simon Potts (Sheffield Viking). Second (for the second year running) was Tim Holden from Halifax in his Contender. In 3rd on the same points was Jack Wetherell (BeaverSC), and 4th were Martin Cooper / Nick Hunt in their RS400 from Scaling Dam making it a Yorkshire 1 – 2 – 3.

Just a point back in 5th was Jonny McGovern / Sarah Williams in the first of the RS200s from port Dinorwic. They were followed by the Lasers of Henry Wetherell (Beaver) and the first of the Yorkshire Dales sailors, Hector Simpson. 8th were the 29er team of Curtis Mearns / Jamie Catchpole (LLSC) and 9th were Chris / Laura Pickles from Yorkshire Dales. Andy Tunnicliffe / Chris Robinson in a Merlin from RWYC rounded out the top ten.

First Junior and Topper was Callum Escritt in 14th (Yorkshire Dales), first Scorpion in 15th were Steve Hall / Oliver Wells, (Northampton) The top Laser Radial was Keiran Hill in 17th and the first Phantom was Simon Hawkes (Wimbleball) in 29th. Leading Ladies / girls were Lucy Yeates / Ellie Deveraux in 28th in a 420 (LLSC).

A number of prizes had been generously Donated by Gul and MSDS, and after the prizegiving winning helm Tom Gillard thanked the club, especially the hard working galley, race and rescue teams, series sponsors GJW Direct and his crew. This was a very well deserved win for the Fireball team, as once again Yorkshire Dales proved to be the place to come for guaranteed wind! 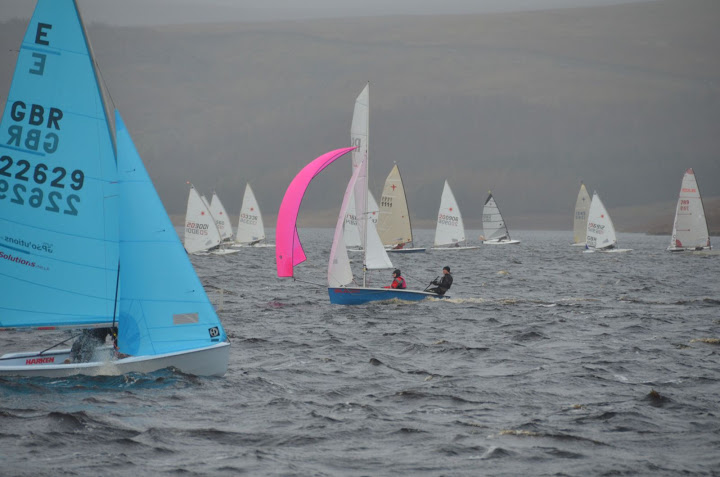