France’s legendary transatlantic singlehanded race, the Route du Rhum, draws millions of spectators. This year, as details of a brutal weather forecast started to sink in, the mood on the dock swung as tension began to build. The 3,500-mile race to Guadeloupe was going to be tough; boat busting, strength-sapping tough.

After a perfect drag racing start, the big winds and huge waves swept in. Boats broke and skippers retired, yet some pushed on through. We tell the story.

Plus, we go foiling indoors to find out how a high-performance America’s Cup boat could provide the basis for a radical new commercial vessel.

And glamour in St Tropez, technical talk in Lorient and big Olympic news in Florida.

Transatlantic drag race - The brutal Route du Rhum - watch here
The Route du Rhum is a big deal in France. This singlehanded race across the Atlantic starts just as winter sets in and has a formidable reputation.
Run every four years, this was the 40th anniversary and had drawn huge crowds of spectators to see this year’s record-breaking fleet.
But as the clock counted down to the start, the reality of a fierce weather system out in the Atlantic started to sink in. The tension was building.
True to the forecast, within 48 hours of the start, the fleet was engulfed by the ex-hurricane. Boats broke and skippers retired, including several of the race favorites. Yet some pushed on through.
The World Sailing Show was there on the dockside to report on the mood before turning our attention to how this infamous race played out.

Sailing on foils indoors - watch here
The high octane, high budget America’s Cup is not where you’d expect to get something for nothing.
While the boats were among the fastest sailing machines in the world they had cost the earth to create.
But now, Artemis Technologies, a company born out of former Cup team Artemis Racing, has utilized the technology that was amassed during the last Cup cycle to create a foiling cat of a very different kind as well as an impressive fully flying simulator.

Olympics to head offshore - plus World Sailing awards - watch here
After months of speculation and debate, the decision is now official, offshore racing will be included the 2024 Olympics.
The news broke at World Sailing’s Annual General Meeting in Sarasota, Florida also the venue for the 2018 World Sailing Awards.
Among those taking home, the trophies were the newly crowned Rolex Sailors of the Year. But there was a new category as well, that of Boat of the Year.

Classic glamour - Les Voiles de St Tropez - watch here
Every year, towards the end of the Mediterranean racing season, owners and crews of some of the world’s most elegant and precious classic yachts park them in the center of St Tropez for Les Voiles de St Tropez.
But the event is more than just classics on parade, as always the great and the good of the carbon grand prix world turned up too.

The future explained - Technical talk at Yacht Racing Forum - watch here
Shortly before the Route Du Rhum got underway from St Malo, in Lorient just to the south, some of the world’s smartest technical brains prepared to take to the stage at the annual Yacht Racing Forum. The World Sailing Show was there with a long list of questions including; what is the reasoning for the radically shaped bows on boats like the new IMOCA60 Charal? Why is aerodynamic drag such a big deal and what is the future for high tech sails? Plus, we talk to Vendee Globe champion and Banque Populaire skipper Armel Le Cleac’h about what it’s like to sail a 100ft trimaran. 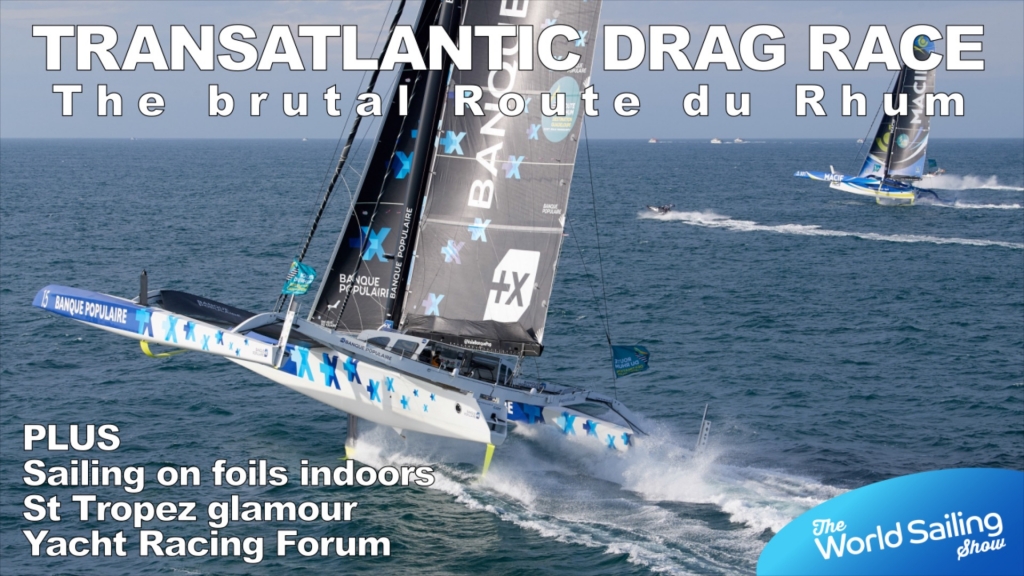