How is it that some classes gain international status while others don’t? I have hardly set eyes on a RS500 and probably couldn’t identify one on the water if it weren’t for the logo on the sail. Yet, how is that the RS500 has earned itself the right to host a World Championship, while its older and more recognisable sister, the RS400, remains only a national class?

Perhaps it’s something to do with the RS500 having a trapeze. While hiking is the norm in this country - maybe because trapezing is seen as too difficult or athletic, or because we do so much racing on small ponds - on the European continent there seems to be a higher prevalence of racing doublehanded boats with a single trapeze. In Germany the 505 is a boat commonly raced by men and women at club level, whereas in the UK it has always been strictly a boat for blokes, with only the occasional appearance by a female helm like our former Olympic 470 rep, Debbie Darling.

So how come the RS400 hasn’t caught on overseas? Maybe it’s that hiking thing, or maybe it’s just a matter of marketing. When LDC Racing Sailboats launched their first two boats - the RS400 and RS600 - in the early 90s, both classes took off like wildfire. But the focus was very much on conquering the UK market, which they did in spades. These days, whenever RS is launching a new boat, the focus seems to be on establishing a global foothold.

Both the ‘4’ and the ‘6’ have become modern classics yet both have seen numbers dwindle since those early years. The RS600 suffered from the arrival of the RS700 and Musto Skiff, while the RS200 has consistently attracted larger national championship turnouts than the RS400 over the past decade. The ‘2’ has been a regular member of the Hundred Club but the ‘4’ hasn’t enjoyed such heady days since the turn of the century.

However the RS400 seems to be going through a resurgence, and this year the class has a great summer ahead, with a RS Eurocup event at Lake Garda followed by its 20th National Championship, taking place at the legendary Mounts Bay Sailing Club. UK class chairman Keith Bedborough is looking to beat the 84 boat turnout they had for the RS Games in Weymouth back in 2011. What a great piece of marketing that proved to be, with all the RS classes enjoying higher numbers that year.

Keith and the RS400 Association are doing a big push for this year, starting with a great venue and backed up by a number of other initiatives. “We’re looking to make the Nationals as international as possible, and we’re expecting quite a few teams to come over from Ireland and as far away as Canada,” he says. “And we’re trying to get the best of the past back too, Craig Burlton, Roger Gilbert, Geoff Carveth, Jim Hunt, Mike Budd, Chris Jennings...”

Keith has been in the class since 1997 having previously raced Enterprises, Laser 4000s and Larks. He started crewing for a certain Nick Craig, but their entry into the class wasn’t an overnight success. “I knew Nick from the Enterprises and I convinced him to have a go in the 400. We stumbled around a bit first, I think we were 14th at our first Nationals. But we were both really keen, and we did lots of sailing with Roger Gilbert and James Stewart, doing a lot of two-boat training together. Nick has a very structural approach to all his sailing, and so we started making progress.”

They twice finished runners-up at the Nationals before cracking the title in 2004, followed up by an Endeavour Trophy win the same year. In total they sailed together seven years before work and family commitments took Keith back to his native Scotland. These days he helms his own boat and finished 9th at last year’s Nationals at Easy Lothian, just down the road from Edinburgh where Keith lives. Bearing in mind the anticipated influx of old talent into this year’s Nationals, Keith would be happy if he could get another top 10 result. “I don’t get much time, not like when I was sailing with Nick, but it’s a good boat if you don’t have much time for practice. You can be an older, fatter guy, it’s not too hard to sail and carries weight well.”

Secondhand prices are cheap too, with no need to buy new if you’re looking for a good result. Keith mentions Mark Barron, a former Laser squad sailor who race to 6th at last year’s Nationals in No.476, an 18-year-old boat with an old set of sails. Recent years have seen the boat get a face lift with a modern-looking set of plastic sails replacing the originals. The good thing, says Keith, is there is no discernible performance difference between old and new, so there’s no pressure to upgrade.

It will be great to see if any of the old guard can challenge Nick Craig and his crew Toby Lewis, who will surely start as favourites. But it will also be good to see if the 20th anniversary at Mounts Bay can be the launch platform for a boat that deserves to return to the Hundred Club. If haven’t sailed one before, try it, because I’m sure you’ll love it. For a trial sail, contact Keith on: kb21182@hotmail.co.uk or look for ‘RS400 Class Association’ on Facebook.

Roll Tacks - August 2013
Age seems to have less and less to do with success in sailing, even if the fitness levels continue to climb. The latest impressive example of this is Geoff Carveth almost winning the most competitive Solo National Championships of recent years. Now in his 50s but still as fit as a butcher’s dog, Geoff went into the final day at Hayling Island in the lead and normally in those high pressure situations he comes out on top. Not this time though, as Geoff failed to find a way through to the front, leaving the younger guns to battle it out, with Charley Cumbley just edging Andy Tunnicliffe for the title, and Geoff settling for third overall.

Roll Tacks - 1 December 2011
If a fleet racing championship comes down to a two-horse race, it turns into a match race, right? We’ve seen it enough times that it must be OK. 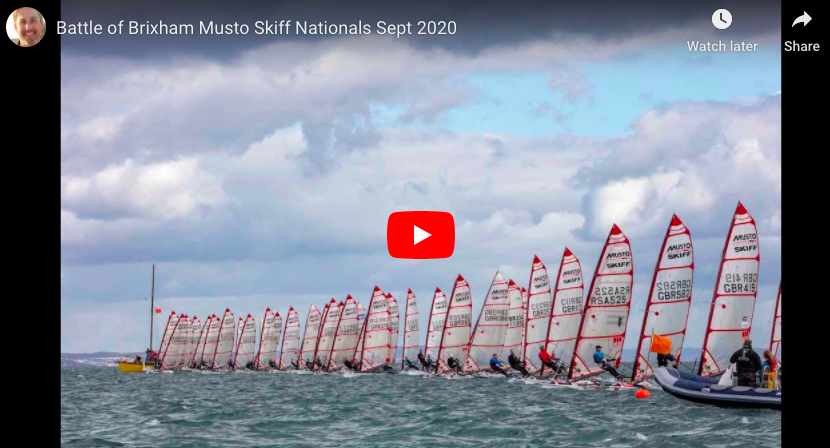 The Battle of Brixham: Sailjuice grills four of the top performers from the Musto Skiff Nationals about a whacky week in Torbay. How did they manage to keep their heads while all around others of the 53-skiff entry were losing theirs? 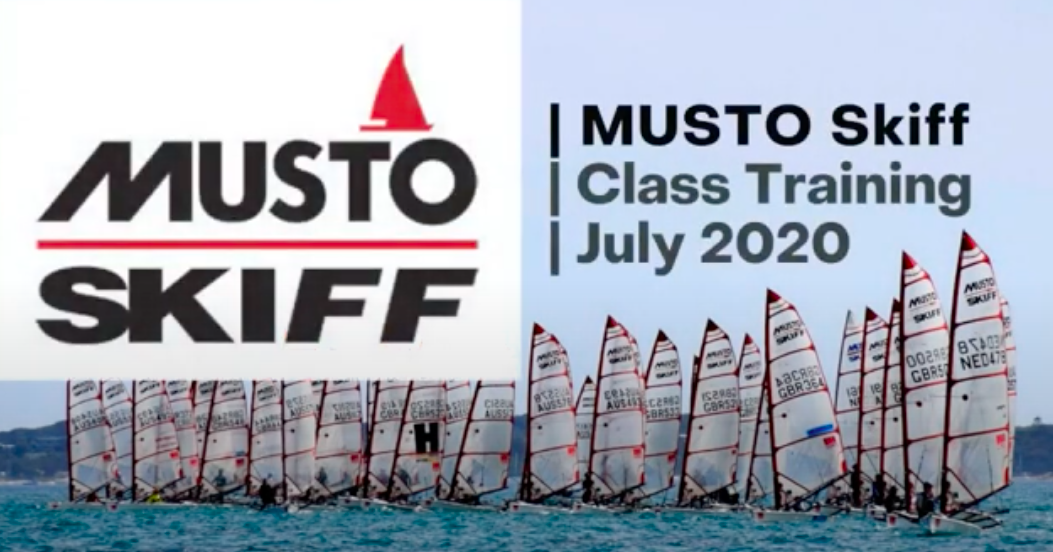 In keeping with the ‘keep no secrets’ ethos that has made the Musto Skiff class so successful over the past 20 years, round-the-cans supremo Ben Schooling, reigning UK National Champion Jamie Hilton and reigning World Champion Bruce Keen hold nothing back as they share their best tips.

Tom Gillard getting to grips with the Musto Skiff

Tom Gillard has won Fireball World Championships and plenty else besides in a variety of classes including the Streaker singlehander and the 505. That's all as a North Sails jockey. But he chooses to spend his own time and money on racing a Musto Skiff, including competing at his first World Championships in Carnac in 2016. 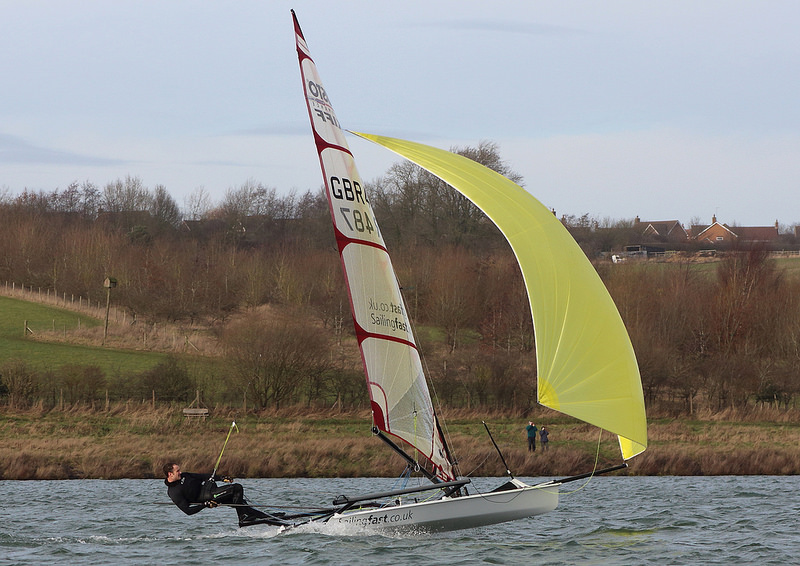 One of the world's best Musto Skiff sailors, Ben Schooling talks about the big challenge of tight reaching with the gennaker, singlehanded. Ben managed to win the Oxford Dash, a handicap event against a motley fleet of 140 different dinghies, on a square course - usually a nightmare for the singlehanded Musto Skiff. Here Ben offers his tips...